This guide will help you complete the new Against The Tide SBC at the lowest price possible. 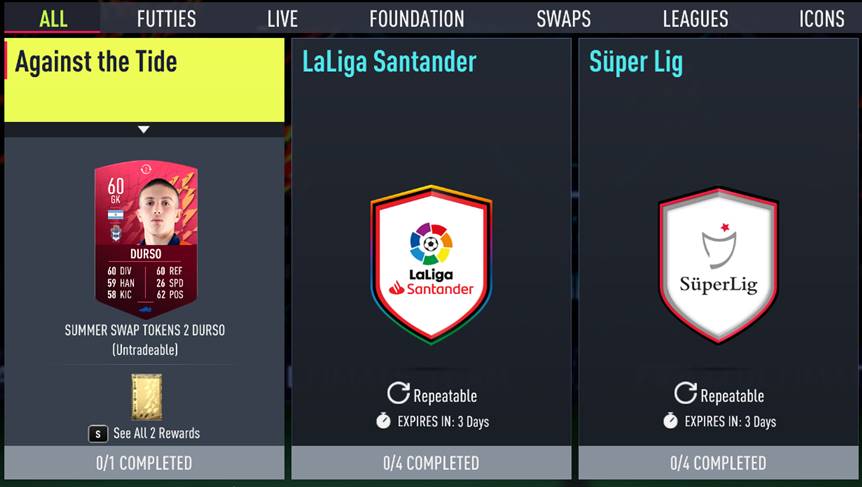 Against The Tide SBC Cheapest Solution in FIFA 22

EA has dropped another one of its daily puzzle SBCs. As you all should know by now that the Summer Swaps 2 campaign is on. If you need a dedicated guide for all the locations of the Summer Swaps 2 tokens then go ahead and check out our Token Tracker for the same.

You need to keep an eye on the daily SBCs and objectives since you never know where you might find the next summer swap token. This SBC we are going to talk about is another one of those difficult puzzle SBCs that not only gives you a Jumbo Premium Gold Players Pack but also the 4th Summer Swaps 2 Token: Durso.

The thing I like about the puzzle SBCs would be the overall value of the SBC vs the reward that we get. Normally I would only have to part with lower-rated players just to get a pack which might help me get a much higher-rated player. Usable or fodder, I do not really care as long as I am getting something worth more than the SBC cost.

Against The Tide SBC Cheapest Squad

I would be helping you all out with the cheapest squad for this SBC. But before we talk about that let’s discuss the requirements :

This is the cheapest squad you could use for this SBC. However, we have used 3 position modifiers in this squad.

You need to use these modifiers to get the chemistry up by 3 otherwise the entire team only gives you 92 chemistry. Check out the total SBC cost for this particular squad below.

Fodder prices are going pretty high at the moment. I hope the prices would be normalized. But at this time of the year, it’s very common due to all the SBCs that we are getting lately. Anyways considering the time of publishing the guide, this would be the cheapest squad you could build.

I would recommend using the untradeables available in your club first since buying fodder off the market at this moment would not be the best thing to do. However, if you are out of fodder or having difficulty building the squad then feel free to use the one I have shown in this guide.

I hope this guide was helpful. Please let us know in the comments section down below and also keep an eye on FPS Index for more FIFA 22 related content and guides.