Wondering what the best Vel 46 class setup would be to quickly get it leveled up?

Well, you have come to the right place. This guide will help you get the best loadout for the Vel 46 so that you can easily win gunfights in Call of Duty Modern Warfare 2.

COD MW 2 (2022) is one of the most addictive games I have played. You not only get an amazing campaign mode, but the best thing about the game is the online multiplayer which keeps you engaged for hours.

There are so many weapons in the game which would be locked when you start playing. Unlocking these weapons, and their camos would take you quite some time.

Not only that, but you also get to unlock different attachments which let you constantly experiment with different kinds of Class Setups.

The Vel 46 is an SMG and we all know how overpowered the SMGs are in COD games. If you have a knack for running around the entire map and eliminating targets, then SMGs are the perfect weapons for you.

The Vel 46 is the second fastest firing SMG after the Fennec 45. It has a pretty decent magazine of 40 rounds which empties in pretty much no time at all. You need to reload and also make sure that you do not unnecessarily waste ammo because this weapon burns through your ammo reserves like nothing.

The weapon has very high recoil and the faster fire rate makes it difficult to control. The damage fall-off over long range is pretty high but it is lethal at close quarters. 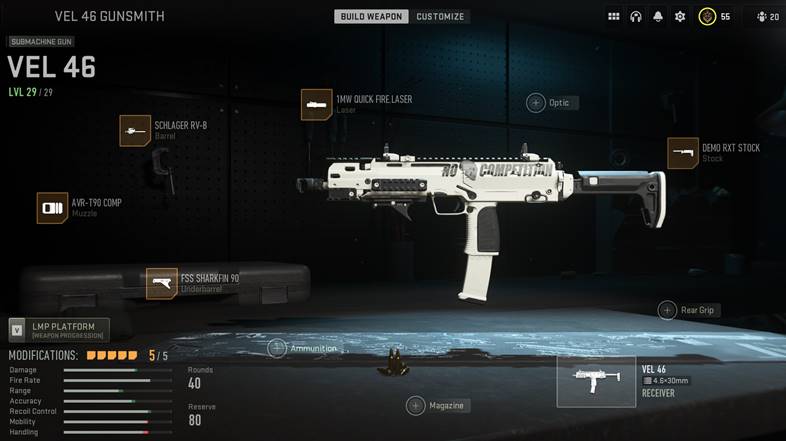 This loadout is based on the run and gun play style. If you are trying to hold angles and camp with this gun then you might find it very difficult to eliminate targets. Long Range shooting is definitely not the highlight of this weapon.

The Aim Down Sight on this weapon is not quick enough and most of the good attachments have an Aim Down Sight con. This is why we have tried to balance out the ADS speed since it is one of the most crucial in an SMG build.

I have tried out multiple builds on this SMG and this is the one that works the best.

For Perks you can use:

For Field Upgrade, try the Dead Silence which literally makes you a ninja as you give away no footstep sound. Easy for backstabbing enemies.

That is all you need to know about the best Vel 46 Loadout Attachments or Class Setup for Call of Duty Modern Warfare 2.

I hope this guide was helpful. Please let us know in the comments section below.