Having a tough time defeating Nayzaga in Dauntless? Here is a guide that will make things easier.

Who is Nayzaga in Dauntless?

Nayzaga is a shock behemoth in Dauntless. It almost looks like a crocodile with huge spikes on its back. The body color of the Nayzaga is blue with yellow spikes at the back which makes it pretty easy to spot when you see one.

Nayzaga is the second shock behemoth that you will unlock and the Threat Level on him will be 5. Now the problem is a lot of new Dauntless players have already made the mistake of thinking that Nayzaga is an easy behemoth to hunt just because he is at only Threat Level 5. And they ended up learning things the hard way.

Nayzaga is an absolute nightmare for beginners. The problem is that the game doesn’t give you much information about any behemoth. The only way to find out is by going on a hunt and figuring stuff out all by yourself. The jump in the difficulty from Lesser Drask to Nayzaga is pretty high. You would think that just because he is an early behemoth he would be easy to beat. But the truth is Nayzaga is the most difficult behemoth to beat among all other behemoths who are at Threat Level 5. If you ask me, Stormclaw, the Threat Level 6 shock behemoth who you fight after Nayzaga, is easier to beat.

Now, the game wants every hunt of yours to feel like a real one. So there is no way of one-shotting a behemoth in Dauntless. You have to learn every single move of the Nayzaga if you want to beat it at an early stage. Here are a few things that you need to keep in mind before going for a Nayzaga Hunt : 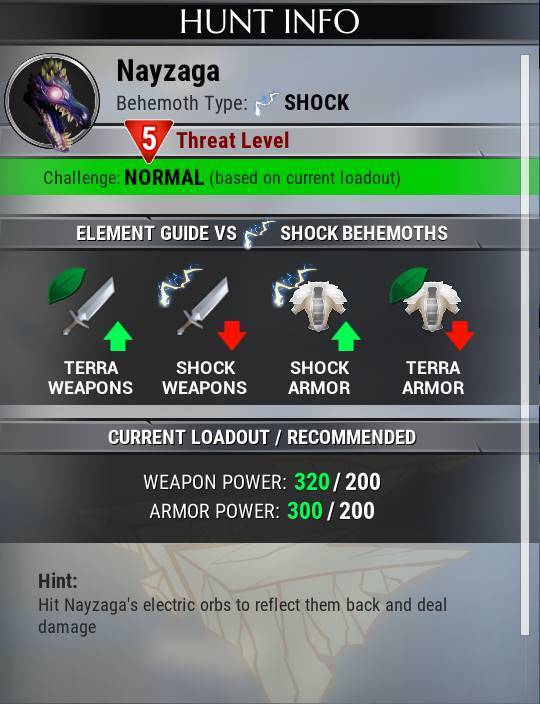 Now that we have discussed all the basic but important tips that you need to follow, time to talk about weapons. So what are the recommended weapons for fighting Nayzaga? Nayzaga is a Shock behemoth so you obviously need to take Terra weapons with you. By the time you unlock Nayzaga you would have already gained access to the Ostian Repeaters and the Skarn’s Rancor. If you don’t then get them first. Now Skarn’s Rancor is a Terra sword, but if you want you can also use the other Skarn weapons as well. The sword is recommended because it is fast, and easy to use and the Valiant Overdrive sword special is very useful. Here is a detailed look at the recommended weapons: 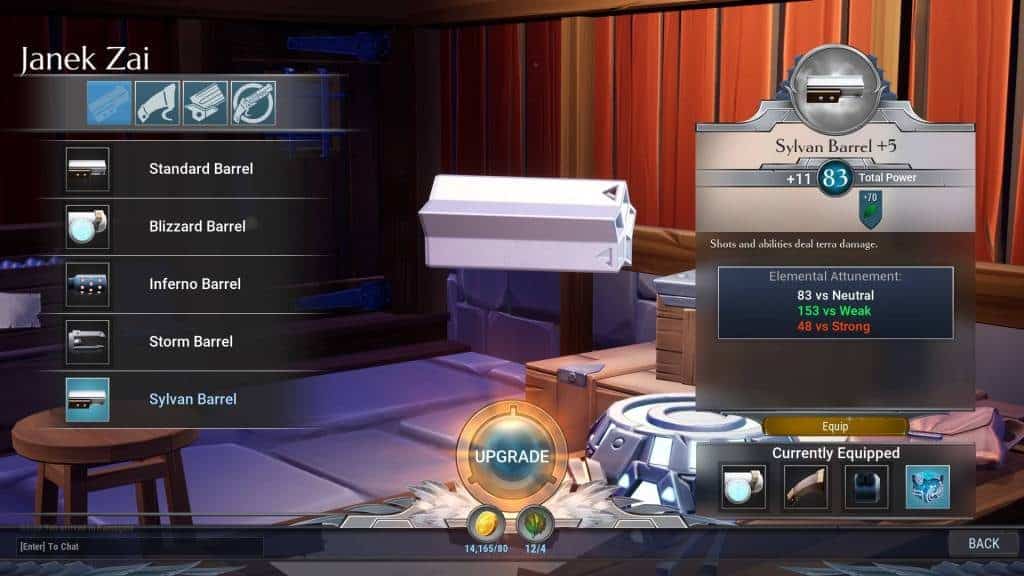 You may choose the weapon class you like the most but for beginners who are not familiar with the attack mechanics of Nayzaga, the guns or the Ostian Repeaters are the best option. I know that a lot of you might argue that swords or war pikes or chain blades are a better choice because they can deal more damage in a comparatively shorter time period. Yes, that is true but that is effective when you more or less have an idea about the movements and attacks of the Nayzaga. It would be better for new players to maintain some distance because dodging the attacks of Nayzaga can be very tricky and difficult at times.

You can get the Ostian Repeaters very easily from Janek Zai. Equipping the Sylvan Barrel would be the best option if you want to make the hunt easier, just beat Skarn 2-3 times. Otherwise, the Standard Barrel would do just fine. If you are using the standard weapon parts then just make sure that your weapon power is at least 180 or you will end up having a tough time.

Don’t forget to make use of the Empowered Reload ability when playing with the Ostian Repeaters. Just reload your gun close to the behemoth and all your shots and abilities will get a damage buff. It is highly recommended that you trigger Empowered Reload before using your Skill Shot ability, you will deal a ton of damage. Also pay close attention to the weapon crosshair or reticle on your screen. Make sure it is red when you are shooting. A red reticle or crosshair means you are dealing full damage with the Ostian Repeaters but if the reticle is white then it means you are not doing full damage

Skarn’s Rancor or any terra weapon 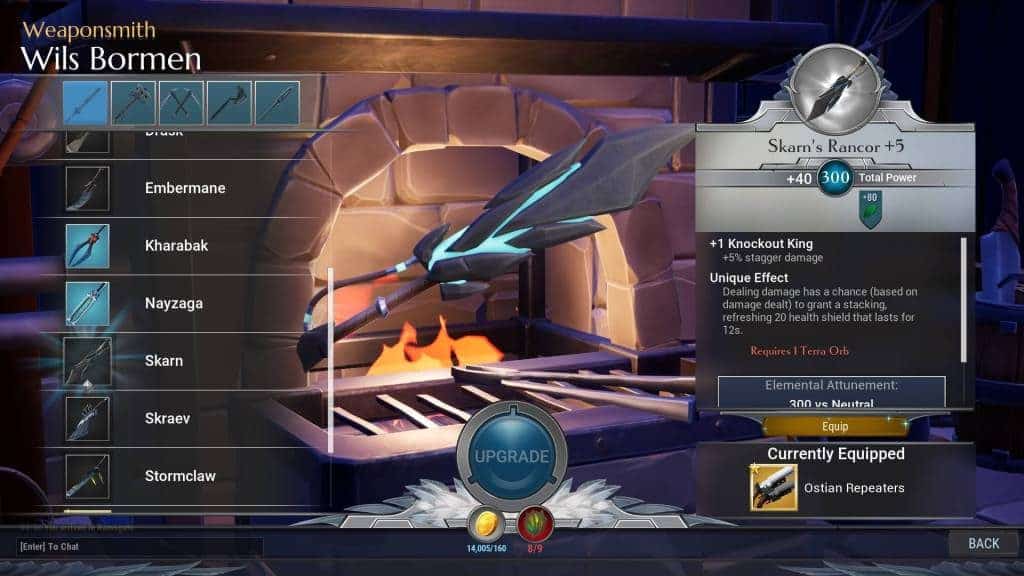 This choice is a pretty straightforward one. It is a sword and it is Terra. The Unique Effect of this one can be life-saving at times, you will find out once you take it to the fight. Keep upgrading your Skarn’s Rancor or Terra weapon until it says ‘180 vs Weak‘ or ‘200 vs Weak‘ under Elemental Attunement.

When you approach Nayzaga for the first time it will do a spin and shoot a ground electric bolt toward you. The bolt is pretty easy to dodge as long as you time the dodge right. After you dodge the bolt, Nayzaga will dash or slide toward you twice. Try to dodge both attacks.

After the dashes, the next move of Nayazaga will depend on your position. If you are standing closer to its face then it will try to attack you by doing hand swipes. If you are standing at a distance then it will deploy electric spikes or pylons. Basically, the Nayzaga has a total of four types of attacks for players standing close to him. They are the hand swipes, spin attack, slam, and the back slide where Nayzaga slides towards you with its back facing forward. The best strategy would be staying away from it after its initial attacks, that would make the Nyazaga start shooting the shock spikes and pylons and you will get a decent time window to go its face and start damaging it because it completely stands still when shooting the spikes. 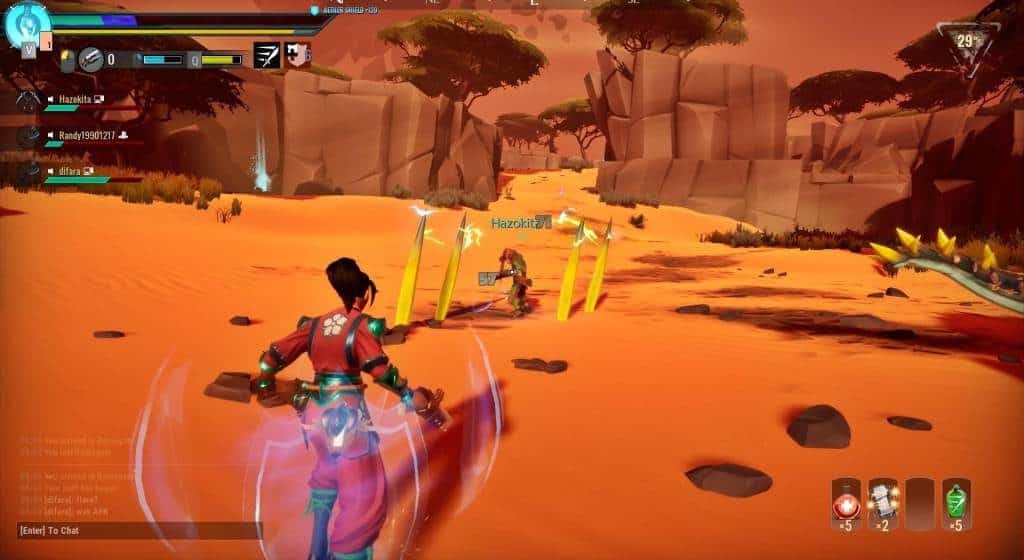 If you are playing in a squad there your first priority should be destroying all those electric spikes or pylons because they can be the sole reason for you losing the hunt at times. The pylons shoot shock orbs toward you that do decent damage but the worst part is you get hit by the shock status effect. Which means you cannot heal or use any type of potion until the effect is gone. And if you do not pay close attention to these spikes then you will have a tough time.

The electric spikes or pylons are pretty easy to destroy actually. All you have to do is hit them a few times and they will break. You can also deflect the shock orbs shot towards you, back to the spikes by shooting or hitting them and the spikes will take 500 damage from it. Just make sure that you break them all.

Next is the Aether mode or Aether-charged mode of Nayazaga. After a brief amount of time, the Nayzaga will enter its Aethercharged mode where the yellow spikes will grow huge and the behemoth will get extremely aggressive. It will again start shooting ground electric bolts, it will dash towards you frequently, etc. Just remember that you will have to remain extra careful during this phase and try to dodge most of the attacks because they will hit you hard. Just shoot the spikes on Nayzaga until they break to get him out of its Aether-charged mode. If you have an Aetherhunter cell equipped then that extra damage will help you a lot.

And finally, the enraged mode when Nayzaga will turn completely red and every attack and blow will deal more damage to you. If you went to the hunt with the Ostian Repeaters then this stage won’t be very difficult for you as you will be maintaining a distance. 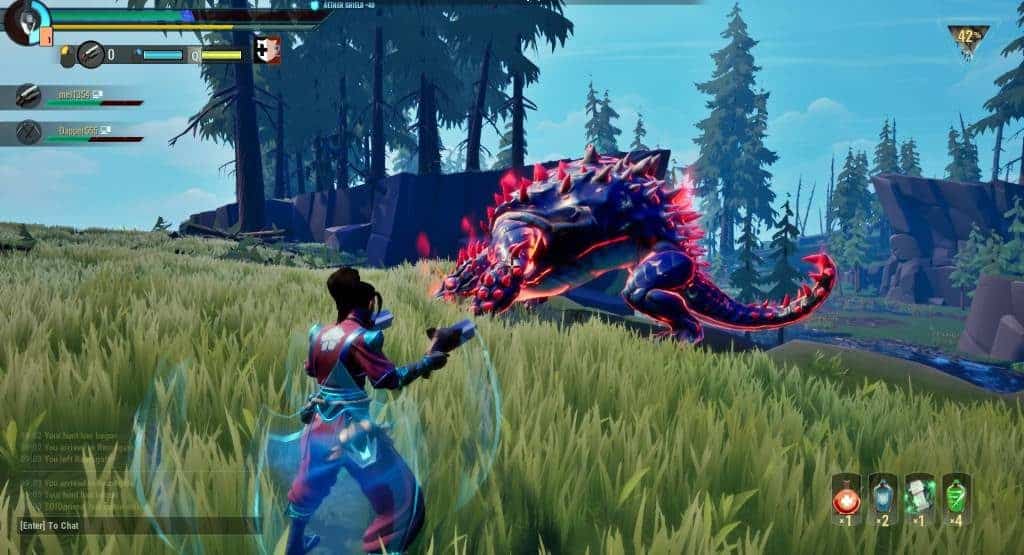 As long as you time your dodges and attacks right, it won’t be very difficult for you to beat Nayzaga. At first, it might be a little hard for you to learn all the attacks and movements of the behemoth but as you continue to fight, you will soon start getting hold of them.

That is everything you need to know about the Nayzaga. If you think that we have missed anything then let us know in the comment section below. Happy hunting!

Shoaib, 30-year-old, is a passionate gamer who has been playing video games since he was seven years old. With 22 years of experience as a gamer, Shoaib can safely claim to have played almost every AAA game released in the world. An MBA graduate from an esteemed university, Shoaib’s love for gaming inspired him to pursue his long-term career as a Gaming Journalist. Apart from playing various games and exploring new cuisines sporadically, he also has over five years of experience in creating and managing gaming websites. With his vast knowledge and enthusiasm for gaming, Shoaib has been able to guide many new gamers into getting better at their favorite titles by providing them with valuable tips and tricks on his website that help them become more experienced players. His contributions to the industry have earned him recognition amongst gamers all around the globe.