This article is about the users who did not receive the 85+ x 3-player pack on the first day of the FUTTIES promo.

The FUTTIES promo would normally be the last promo of the year. And like always the FUTTIES cards would have the most insane stats you would see throughout the year.

For those who are new, the FUTTIES promo consists of players that you could get through objectives and SBCs. It is not like the usual promo cards in packs. There is also a vote every week on which FUTTIES card you would like to see. The winner would obviously get the special card.

Unlike last time, EA decided to kick-start the FUTTIES with a little gift. They gifted us 85+ times a 3-player pack. So every user who logs in after the FUTTIES promo begins would be getting this player pack for free. 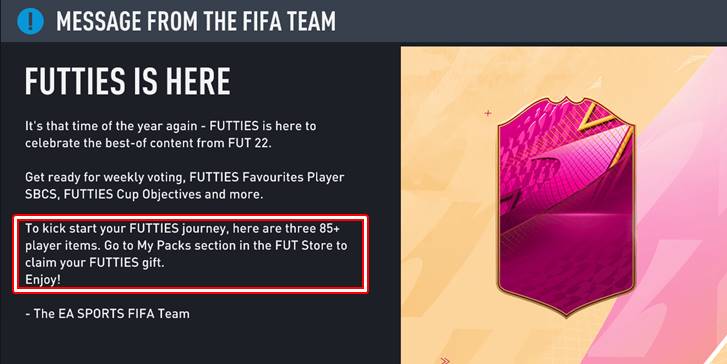 However, there are a lot of users complaining about not receiving this particular player pack. As you can clearly see in the picture above that all you have to do is go to FUT Store and then go to My Packs and you would find the 85+ (x3) player pack right there.

But unfortunately for me and a lot of users all over the globe, there would be nothing in the store.

Well, apparently there is no official fix as of now. I tried restarting my game several times but that did not help. There is no point even trying since EA has admitted that the issue is from there end. EA is one of those companies that makes sure you get what you deserve.

Take a look at this snap from their official communications on Twitter. They clearly said that they would be updating that particular thread about the details of this issue. They are currently looking into it and all you have to do is be a little patient and keep an eye on this thread.

I believe there might be an update coming soon which would fix this problem and you would see the 85+ x 3-player pack in the FUT Store under My Packs.

I hope this information was helpful. Please let us know in the comments section down below. Also, keep following FPS Index for more FIFA 22 related content.