FIFA 20 did give us some epic cards this year. When we talk about the meta this year it is pretty much the agile players who win. The shorter the better. Short agile players with great balance do really well this year. No wonder we don’t see Ronaldo in every squad this year.

However, since the release of the TOTSSF (Team Of The Season So Far) cards, we did come across quite a few cards which are of course budget friendly and at the same time pretty good.

Let’s look at this card : 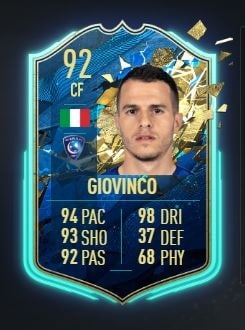 This man is unbelievable. Even though he is 5’4″ but that actually acts as his strength. This dude turns in the blink of an eye. His 99 agility and 99 balance actually help him turn and accelerate super fast. He literally takes off like a rocket. He has amazing dribbling and shot power and can drill those near-post shots like a bullet. His finesse shots are really good too and so is his passing. His aggression is also good. He tries to win those 50-50 chances but often comes out as the weaker one.

He is physically the weakest player in the game. The defenders just need to touch him and he is done.
The first thing you need to keep in mind is that you should not let a defender come as close to you. Do whatever it takes to get away from the defenders but try not to go into a physical battle with them, you will never come out strong. His finishing on paper looks brilliant but somehow in-game it was just not happening. He would miss chance after chance. Even though he would hit the target for you but the aim is more toward the keeper than the top corner.

Hawk- to boost his aggression, pace, and finishing mainly. Strength won’t make much of a difference.