Keeping all these in mind we need to build a game plan for our squad.

Let’s check out the meta custom tactics for this year.

Like Last year 4-2-3-1 is again one of the most meta formations this year. The “Get in Behind” instruction works very well as your forwards make really good runs. They time the runs really well in order to stay onside.

So let’s see what could be the best tactics for this formation until now. 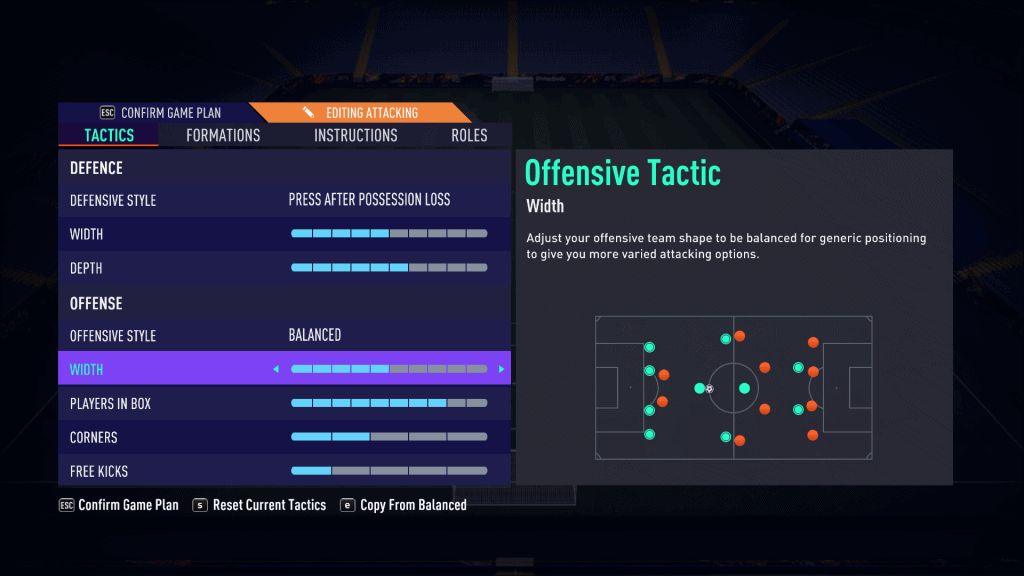 The Gameplay this year is a bit sluggish with improved animations which feels a bit slow. But dribbling feels more realistic. Agility and balance is again the most dominant feature like last year.

With the defenders being slow and very less agile as of now the best strategy for FIFA 21 would be to play high-line pressure defense. Which is basically an offensive mentality.

You can see that I have used Press After Possession Loss as my defensive style. The reason is that we have to win back the ball quickly so that we can maintain the pressure on the opposition.

We leave the Width at 5 and the Depth high up the pitch at 6.

To pressurize my opponent’s defense we need to have more men forward. This is why I have kept Players In Box at 8 and Width at 5. Remember if you have more players in the box the width should not go under 5 otherwise, the players will just have very less offensive space to position themselves properly.

So if you are up by a goal and there are just 10 minutes on the clock. What do you do? Playing a high line might be a huge mistake. You can get punished on a counter. So this is where the defensive strategy comes into the picture. We need to see out the game.

I have a pretty nice Defensive Strategy for you as well : 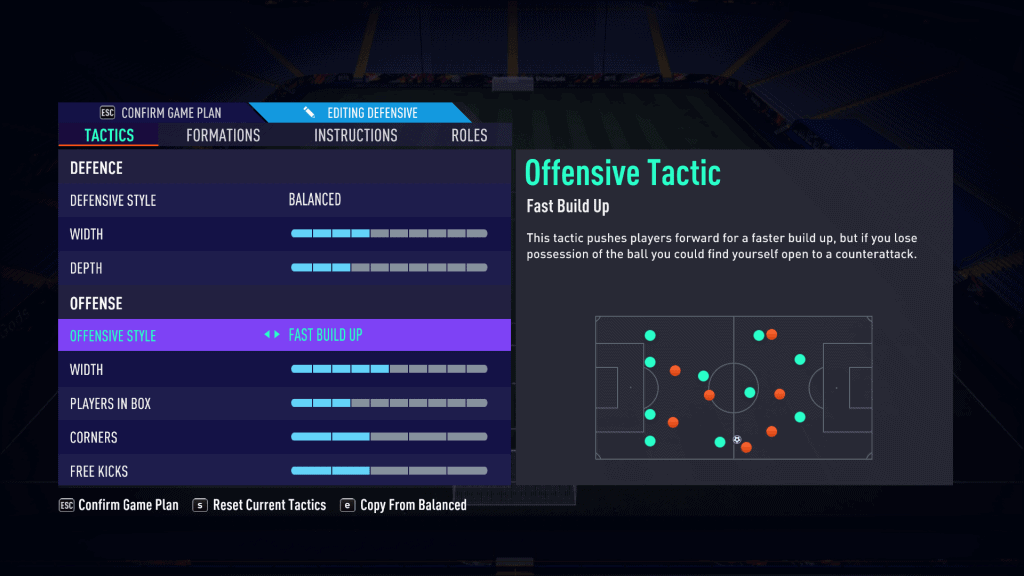 You can see clearly that I have chosen to have a solid defense line but reducing the Depth to 3 and Width to 4. My defenders will now be in the box. They will not get outpaced since I am playing a low line.

The reason why I used Balanced instead of Drop Back is that the defenders will not go back too close to the goal. They will still have a bit of Aggression in them. This year Drop Back might backfire since the defenders are slow to turn and agile forwards will have an advantage if defenders are just holding back.

The offense is a bit tricky here. If you get the ball you might not want to lose it. Or you may try to catch the opponent on a counterattack. Depends on what you want.

I have you Fast Build up since I want to counter and get the ball back in the opponent’s half as quickly as possible. If I score that is great if not the opponent will again have to build up an attack which will consume time.

But if you want to hold on to the ball you can change Fast Build up to Possession or Balanced.

The width will remain at 5 and Players in Box will be at 3.

Hopefully, this Strategy will help you win and dominate your opponent. I have tested it in games and I dominated teams that were far superior to mine. Hence do not feel shy to try these tactics out. Enjoy the Game.