Wondering how to get the 95 rated FUTTIES Adama card quickly ? Here is how you do it. 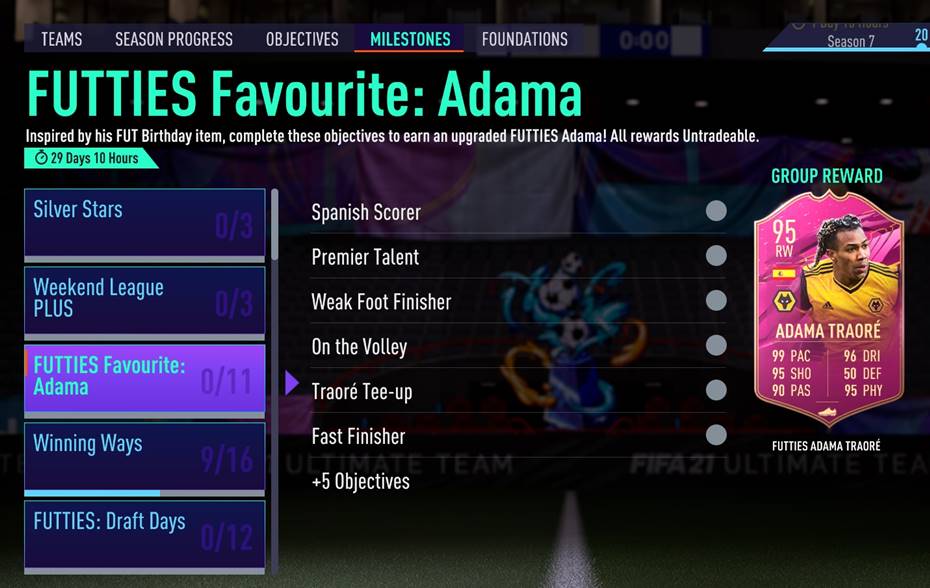 The new FUTTIES Adama Traore like the Atal card looks absolutely cracked. We all know he had been a nightmare for defenders when brought in as a super sub in the second half earlier this year. In fact, his FUT Birthday card was so good that people started him as a striker. He surely did wonders with his 5-star skill moves and amazing strength. He literally used to bully my gold Varane back then. Imagine how amazing this new card would be. On top of that, he is absolutely free. But, just like FUTTIES Atal, you need to grind him a lot.

Where to find FUTTIES Adama Traore?

If you are looking for this card in the Objectives section then you will not get him. You need to go to the Milestones tab and scroll down until you see the Milestone Objective FUTTIES Favourite Adama

How to complete the FUTTIES Adama Objectives Quickly?

There are some objectives that can be done in FUT Champs as well as I have said. If you are planning to play FUT Champs this week then you can do those while playing FUT Champs. Objectives like Crosses and Assists will go hand in hand. If you get a cross that leads to a goal it results in an assist. What you need to do is think about which of these objectives can be done in one match. Then do those objectives. If the objectives do not require a win just do not try for one. Take the loss but make sure you get that objective done.

Finesse shots, Hat-Trick hero, and double delight could be done in one game also. For double delight make sure you have the assist with a cross that would make it easier. Play all Squad Battles games in World Class Difficulty as the only objective which requires a World Class Difficulty is the one for the 3 crosses. When you complete that switch to professional difficulty for making things easier.

There you go, the easiest way to quickly get the 95 FUTTIES Adama Objectives done. If this guide was useful please let us know in the comment section. Also, share your thoughts on this card.