We have another showdown SBC and this time it is Tolisso from Bayern Munich. Now a lot of you will be confused on which SBC to do. Obviously you can do both if you have enough fodder but remember this only one of them will get upgraded. Even though both having similar pricing. If you had to choose one , whom would you go for ? Well, that is what we are here for . 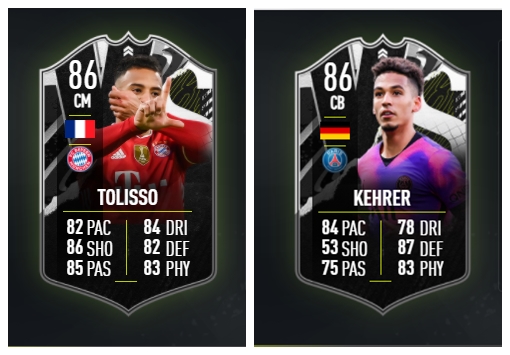 FIFA 21 -Showdown Kehrer or Tolisso ? | Which SBC should you do ? PSG vs Bayern

So , considering the fact that both are great cards but in different ways it could be a difficult choice. Even though your decision could be based on which one you need more in your team or whom you can fit into your team but just hear me out okay.

Both are 86 rated now , but since this is a showdown card only one of them will get upgraded. If you had watched the PSG vs Bayern match you would know that PSG had got an Away win. They are leading 3-2 on aggregate. Not just that, they have 3 away goals. Next match will be Home for PSG and I would take my chances on PSG winning and progressing to the next round. With that being said , Kehrer seems like a more obvious choice.

Kehrer is so good statistically and in game that even without an upgrade he would still be incredibly good. I have used Tolisso and he is vey average. He would badly need an upgrade to be good  but I personally do not see that happening since I do not feel Bayern would beat PSG at home. Therefore , Kehrer should be the one you should go for. Hope this guide was helpful. Enjoy the game.