The Future Star Promo is finally here and the new cards look absolutely amazing. As for SBC, we got a Bruno Guimaraes card. The fun fact is we have to choose from two different variations of the card. If you are confused about which one to choose, you have come to the right place. 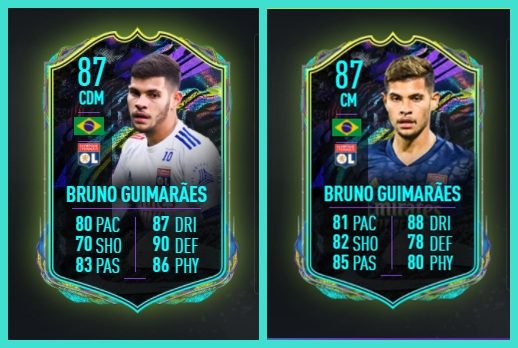 Firstly let me tell you that this SBC will cost you around 270-290k which is not less by any means. However , the fact that we get to choose form two different variants is what makes it more interesting. Sort of like the Inaki Williams SBC we had earlier.

So we have two cards one of which is a CM and the other is a CDM. The CM has nice stats overall except for defense but the CDM version has lower shooting and much higher defense. Choosing one would be very tough. It kind of depends on the formation you use. If you want a CAM or a CM the shooting variation would be more useful. However, If you want a CDM or even a CB, the defensive variation is what you need.

Which One to Select?

All I want to say is that I would not give up exceptional defending for average shooting. If the defending on this card had been very average, say for instance it had been around 83 or so. I would have gotten the shooting variant of the card. The fact that the card has like 90 defending and also a plus 6 to physical is why I would go for it.

Hopefully, this guide had been helpful and now it could be easier for you to select which variant of the card you want. Enjoy the game.