We have yet another SBC which is going to be a variation pick. This time we have the young Portuguese Pedro Goncalves. This SBC will cost you a little more than 150k or 160k. And you get to pick from an 87-rated CM card or an 87-rated RW card. 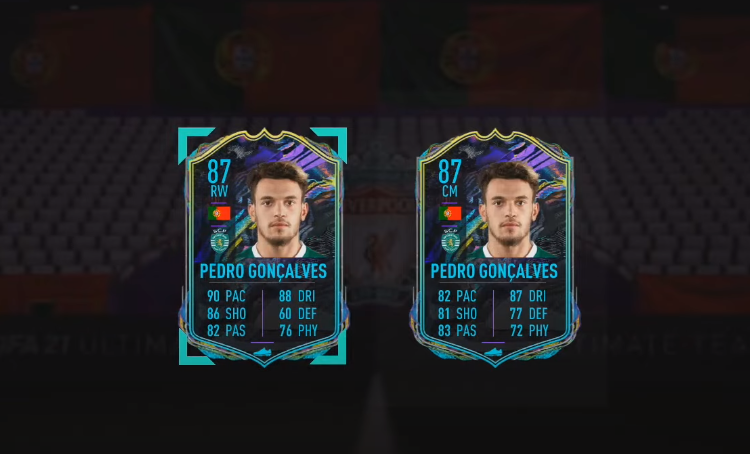 Looking at the stats on both the cards it seems like both are pretty average. Nothing extraordinary about the stats. If you already have done the Ronaldo SBC then you might not want to get this done as well. For me, personally, the SBC seems to be a little overpriced.

But if you have a nice Liga NOS team or if you haven’t done the  Ronaldo SBC then you could try the RW version of the card. The CM card looks average as well. If you are honestly confused about which one to pick, let me help you out with that.

Which one to Pick?

Considering the fact that the Centre Mid card looks very average, I would go for the RW variation of this card. The reason is simple. If the center mid-card had 80+ defending probably I would have gone for that card.

But if I boost the defense with a chem style I will still lack passing and shooting which are also important for a CM. I would not play him as a CDM, to be honest. At least for the RW card, I would get a little bit of pace to work with. I can use a Finisher chem style on him or may even go for Hunter and max out the pace.

For the ones who have the RW Ronaldo then you can try out the CM version of this card. For me, I would go for the RW version.

If you are wondering whether you need to do this SBC or not then I would just say No. Save your fodder for someone better. He looks very average on paper and his RW performs average too. From an SBC point of view, I would not do this one. Well, I hope this guide has been helpful. Enjoy the game.