This guide will help you build the best MLS Squad for the Squad Foundations Shaqiri Objectives in FUT Friendly Mode Managerial Masterpiece.

We are 1 day away from the FUT Birthday promo and EA has dropped two new Squad Foundations players. This is the second time we are getting Squad Foundation players and this time it is going to be players from the MLS (Major League Soccer) from the USA.

Xherdan Shaqiri is one of my favorite players. I love how fast the guy is in real life and on top of that he is super strong as well. The Squad Foundations Shaqiri card however does not do justice to his physical attributes. 79 Physical is just not right. It is not Shaqiri if he does not have like 90+ physicals. he is like the Swiss Adama Traore.

However, we are here to see how we can easily complete the objectives for this card. At the end of the day, it’s a free card and we have 60 days to get it done. So why not. If you are trying to run an MLS team I do not see a reason why you would not go for this card. You may go ahead and pair him up with Pato if you had done the SBC.

How to Complete the Squad Foundations Shaqiri Objectives quickly :

In order to get the objectives done you have to enter the FUT Friendly Mode Managerial Masterpiece and play all your games there. Let’s check out the requirements for it :

Keeping the requirements for Managerial Masterpiece in mind this is what I feel would be the best team you can use for these objectives :

The objectives for Shaqiri require you to have 7 MLS players in the starting 11. Therefore we have exactly 7. The MLS does not have decent fullbacks. Therefore I have used Brazilians to get a nationality link instead : 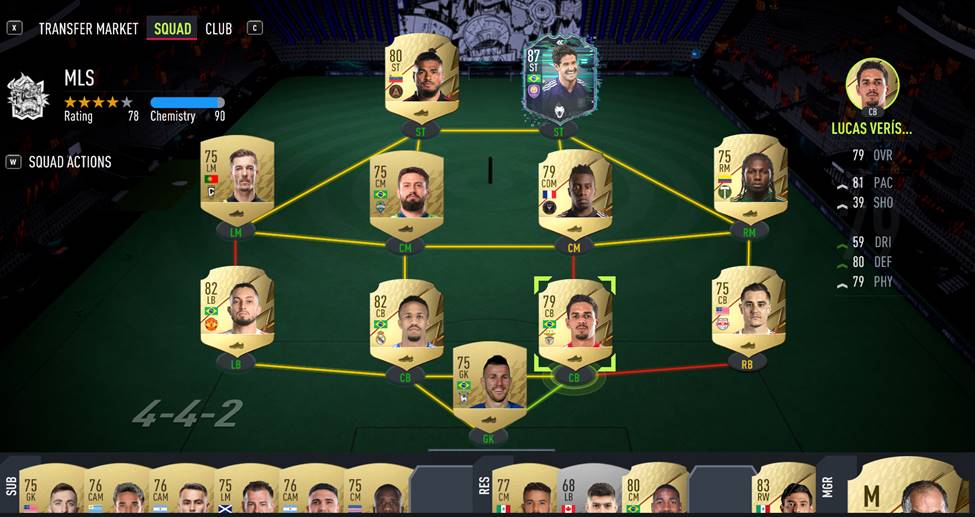 Well, this is the squad I would be using for the objectives. If you do not have Pato you can replace him with anyone you want who fits the team. You would have to make changes accordingly. But the rating should not go higher than 87 or else the Team rating would go up.

Talking about the objectives they  do not look so difficult :

Sustained Finishing: You need to score using MLS players only while having 7 or more MLS players in the starting squad in 7 separate matches. One goal a game for 7 games. Win or loss does not count.

Made in MLS: You need to make 4 Assists with MLS players while having 7 or more MLS players in the starting 11.

In the Bag: You need to score 4 goals with Volleys using MLS players while having 7 MLS players in the starting squad. You can easily do this by having two strike formation. When you go 1 v1 with the keeper cross the ball to the second striker and volley it in. You can double-tap the pass button to make a slightly lofted ground pass. You can also score off a volley from that. You can also do a rainbow flick and volley the ball in. Or you can also volley from a lobbed-through ball.

There you go, the best squad and the easiest way you can complete the new Squad Foundations Shaqiri objectives. If this guide was helpful please let us know in the comments section below. Also, keep an eye on FPSIndex for more FIFA 22 content.