This guide will deal with the objectives for Everton and Tagliafico for the new FUT Versus Promo. 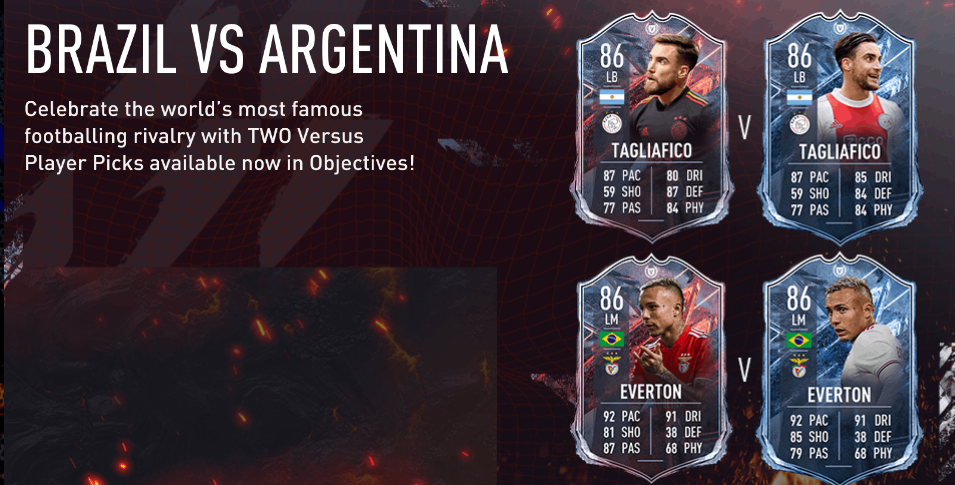 FIFA 22 – Everton & Tagliafico Objectives Renowned Rivals | Which one to pick and How to do?

Well, it’s Friday and we finally have a new promo. It is the FUT Versus promo where we have a very interesting concept. Earlier in FUT, we used to have the FUTMAS promo which is replaced by this new VERSUS promo. Let me tell you a little bit about this.

The Versus Promo which could also be called the FIRE VERSUS ICE gives us two versions of every card released with the promo. These versions will be the Fire and the Ice versions and they will differ based on statistics. It is a lot like the variation pick SBCs we used to have the only difference is that this time we would also have tradable cards which would have two variations. As of now, the Fire variations are available in packs until Monday, December 13th. We would then have the Ice variations in packs.

Like always EA has dropped not one but two amazing free objective cards. Since the concept of this promo is Versus, EA focused on the two most famous football rival nations: Brazil and Argentina, and gave us Everton (Brazil) and Tagliafico (Argentina)

In order to complete these two objective cards you need to play all your games under the new FUT Friendly Mode: Renowned Rivals. These are the requirements to gain access to it. 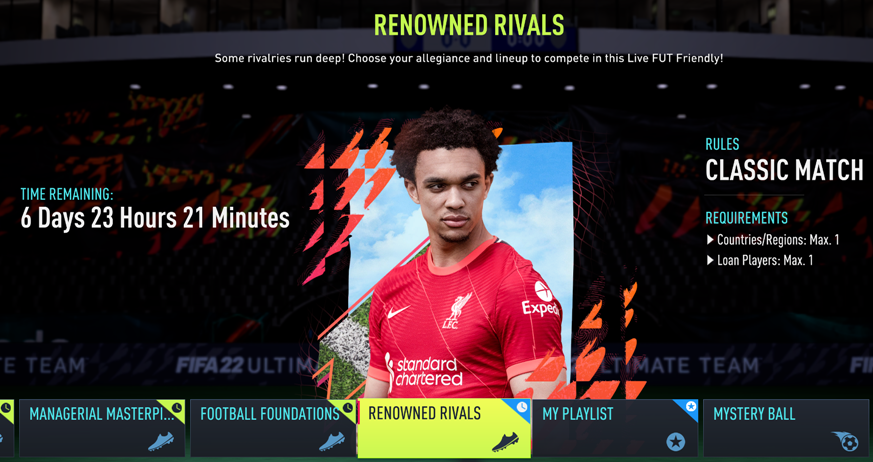 How to objectives for Versus Everton and Versus Tagliafico quickly :

The objectives for these cards seem very easy. This is how you can easily complete them :

Remember you need to have a full Brazilian Squad to do these objectives. This includes Sub Bench.

Remember to use a full squad of Argentina players for these objectives. Sub bench included.

Which Variation to select :

Both the Fire and Ice are good in their own way but which one would work best in-game? This is what we are going to do now.

Versus Everton: Fire or Ice?

If you check out the two Everton cards that we are getting the Fire variant has better passing and poor shooting while the Ice has good shooting but poor passing. The choice here could be difficult and also depends on where you would want to play this guy.

It all depends on how you want to play him. The game already has good enough strikers so playing him as a winger is recommended. For that, the Fire card makes more sense. Therefore get the fire card.  I use the 85-rated Vinicius card and I hate his passing so much. Simple passes he won’t be able to make. Therefore I would personally take the Fire card over Ice.

The Tagliafico card is a Left Back. The most important thing you need is pace and defending. He has both. But the Fire card has better defending than the Ice card which has better dribbling. For me, 80 dribbling for a defender is fine unless I want to play him as a CM or CDM. If you are not planning on that then this one is not very difficult to choose. Just get the Fire card for the +3 to defend.

There you go, an easy guide on which variant to choose and how to complete the objectives for Versus Everton and Tagliafico. I hope the guide was helpful. Do let us know in the comment section below.