This guide will help us decide which Brahim Diaz card to pick from the new Future Stars Player Pick SBC. 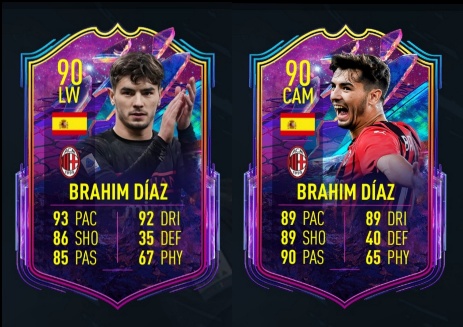 FIFA 22 – Future Stars Brahim Diaz SBC | Which one to pick?

However, it might be a little confusing when it comes to which card to pick from the LW and the CAM variants. The stats are different for both cards and I will be helping you come to a proper decision on which one would actually be better for your team.

Which Future Stars Brahim Diaz should we select?

Considering the fact that the LW variant of the card has a better pace a lot of people would blindly select that one. We all know how much pace is important for a player. Most probably you would be getting away with pace in the lower divisions but trust me when you reach Division 1 or Elite pace does not really play that important a role unless you are Mbappe.

I would personally select a player who has more than average pace with great shooting over a player with decent enough pace and less than average shooting. With the Brahim Diaz card, the CAM variant gives you literally everything you need from an offensive player.

You get a decent pace at 89, very good shooting at 89, amazing passing with 90, and decent dribbling as well. The LW variant, however, would give better pace, dribbling, and 2 more to physical which would be 67. I do not feel that would make any difference in the game over 65 physicals.

Dribbling is a very user-oriented stat. If you are not good at it a boost from 89 to 92 would not make such a difference. However, a shooting boost from 86 to 89 will make a huge difference in the game with the 5-star weak foot. Yes, if I use a 5-star weak-foot guy I would take full advantage of the shooting and passing that the CAM variant offers to us.

It’s not that the pace on the CAM card is bad. He has 93 acceleration which is actually what you need to get away from defenders. Use a hunter on him and trust me he would be fast enough. The CAM variant also helps you in linking as you change his position from CDM to ST. The LW however only offers you a change from LM to LF which does not necessarily make a huge difference in linking.

Therefore if you ask me the CAM variant of the card makes more sense. I would personally choose the CAM over the LW variant and I would suggest you all to do the same.