This guide will help you choose between Haraguchi and Serdar from today’s Showdown SBCs.

FIFA 22 – Haraguchi Vs Serdar Showdown SBC | Which one to pick?

EA has really managed to make a no-promo week far more interesting than what we had expected. The week is packed with daily Showdown cards which have possibilities for further upgrades.

For the ones who do not know what the Showdown cards are all about, basically where a player is picked from opposing teams and has a chance of receiving a +2 upgrade if their team wins. A +1 upgrade to both players if the match ends in a draw.

This makes things more interesting as we would have the decision to take based on choosing the right player. Hence we are here and I will help you make this decision on which showdown card to choose between Haraguchi from FC Union Berlin and Serdar from Hertha BSC and both from the Bundesliga.

Which SBC to do?

People rocking a good Bundesliga squad would love to have one of these showdown cards. The Haraguchi card would be a CAM who has a decent enough pace along with good passing and dribbling attributes. He is of course a 4-star combo which is ideal for a CAM.

Serdar on the other hand is one of those Gullit Gang members with 80+ on all stats. However, his 3-star combo lets him down. His physical and defending attributes are really good and he could play as a box-to-box midfielder or maybe a dedicated CDM on Stay Back.

Firstly lets check out the Bundesliga Standings along with the last 5 game results : 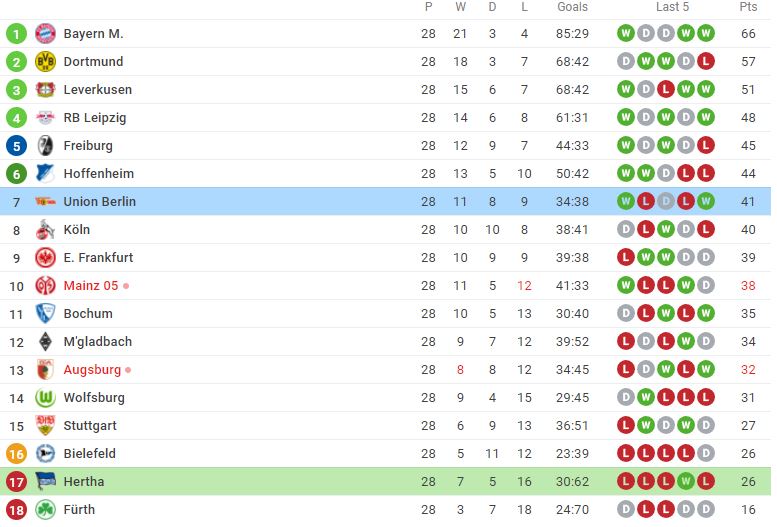 You could see Hertha isn’t standing well on the table. They even lost 4 of their last 5 games while Union Berlin stands strong in the 7th place losing only 2 of their last 5. If you talk about performance I would surely take Union over Hertha any day.

If you talk about Head to Head games here is some data you would love to see :

This is the final score of the last game these two played against each other. Even though there were two Own Goals in the game but Union definitely looked stronger. Here is a stat table for their last 10 games against each other.

The matches were extremely close but Union did manage to win more games than Hertha. So if you ask me I would say Haraguchi would most likely receive the +2 upgrade as I personally feel that Union Berlin would snatch the win in this one.

However, Haraguchi is from Japan and would definitely be difficult to link. Honestly, the card is not so good without the upgrade. However, if he receives an upgrade the pace would go up to 94, making him really good at CAM or ST.

Serdar on the other hand is German and easy to link. He is good on every stat but is less likely to receive an upgrade. So if you could play Haraguchi at full chem then I guess you should go for his SBC. If both of the receive a +1 I would say Serdar looks better to me. As a card, he is easily linkable and has decent stats.

Therefore do the Haraguchi Showdown SBC and if you are absolutely sure of playing him in the starting 11 on full chem. Otherwise, if you look at both cards without thinking of anyone getting upgraded Serdar makes more sense. There is no point playing Haraguchi on 8 chem even if he is upgraded as Serdar would easily be the better of the two unless you have full chem on the upgraded Japanese CAM.

I hope the guide was helpful. Please let us know in the comments section down below. Also, follow FPS Index for more FIFA 22 related content.