FIFA 22 – How to do Captain’s Cup Objectives Quickly

It is Friday and we finally have a new promo in FIFA Ultimate Team. To be honest I was kindly waiting for this one since last week even with all the Showdown SBCs it kind of felt empty as there was no promo. But the wait is over and EA has finally launched the FUT Captains Promo.

The promo is about the players who have brought glory to their teams while wearing the captain’s armband. This includes footballers from both past and present. Not only that, we have the upgraded FUT Hero Captain cards as well.

Just like every other time EA has dropped objectives for the promo. One of them is a free FUT Captain card and one of them is Jumbo Rare Players Pack which I would happily take as the objectives contain other packs as well.

Just like the Classic Cup this one too is a win-based set of Objectives that has to be played in the Captain’s Cup mode. In order to enter the Friendly Mode you would have to set up a squad. Let’s quickly check out the requirements : 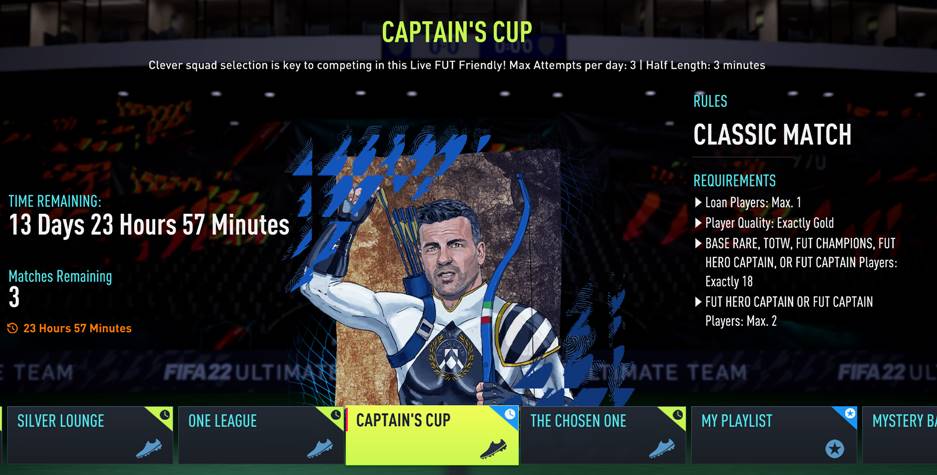 It is also not necessary to have FUT Red Cards or TOTW. You can just use Gold Rares only. In case you want to use FUT Captains then you cannot use more than 2.

Once you get access to the Friendly Mode: Captain’s Cup all you have to do is get wins. You would have to get a total of 14 wins. This is what the rewards look like :

You have a total of 3 Attempts per day. The Objectives will be there for 14 days. Which gives you 42 games in total. Out of these 42 games, you would have to win 14 games to get the last reward which is a Jumbo Rare Players Pack (Untradeable).

I would recommend everyone to start the objectives from day 1. The later you start the lesser games you get. So you would have to hurry.

I hope the article was helpful. Do let us know in the comments section down below. Also, follow FPS Index for more content and guides related to FIFA 22.