Are you confused why you didn’t get the Red Player Picks from the FUT Champions Rewards? Well, we will let you know about it.

The best thing about FUT Champs this year is that you do not have to wait until Thursday to claim your rewards. You can do that instantly now. However, it seems like a lot of users who completed FUT Champs did not receive all the rewards they were promised. The Red TOTW Player Picks that we were supposed to get were not there. In fact, the rewards also did not show the items whereas before it certainly did.

I got really confused when I could not see the player pick items. I thought EA must have changed the rewards after the recent update. However, I went trough the patch notes and there was no such thing in the update. Which literally means we were not given the Player Picks. This could most probably be a Glitch since EA never really robs us of what we are supposed to get.

Is there a Fix? What can be done?

Apparently, there isn’t a fix that would instantly bring the player-pick rewards to your account. Instead, you could take a look at this. 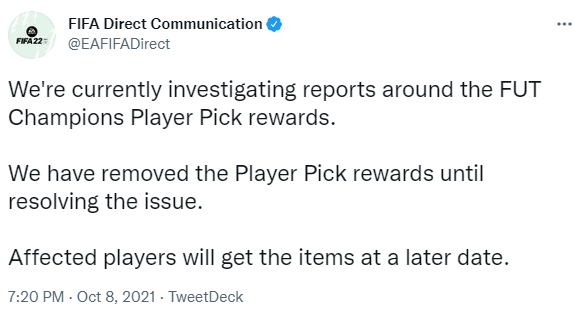 This clearly states that EA did have an issue with the Player Pick items not showing in the rewards list. They removed it themselves until the issue was resolved. 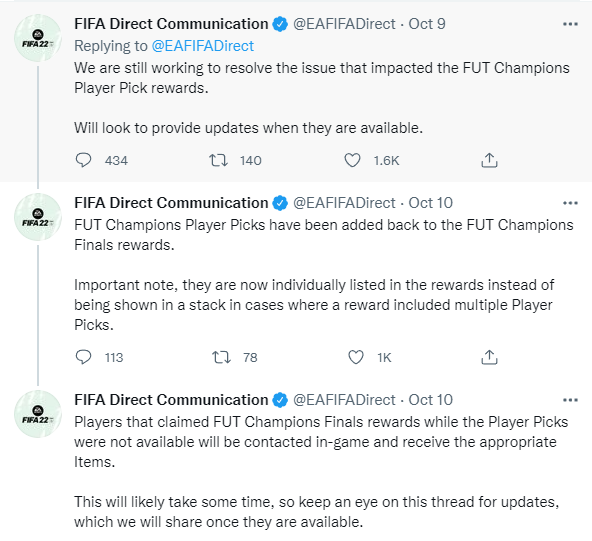 They later Communicated that players who claimed their rewards during this time period when the Player Picks were not showing did not get their player picks. EA will contact them in the game and they will receive the items as promised. Now we do not know exactly how long this will take. But I can assure you, that everyone will get their TOTW Red Player Pick Items as promised by EA.

Patience is absolutely key here. There is no need to worry. Keep following the FIFA 22 Official Twitter page for more such news regarding this topic or anything else in general. If this guide was helpful do let us know in the comment section.