This article will help you decide which FUT Showdown SBC you should go for – Gerard Pique or Niklas Sule. 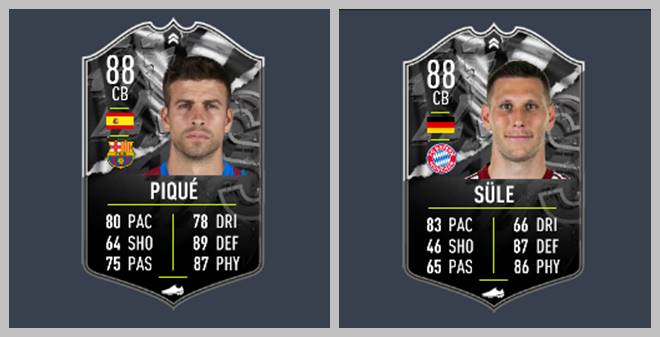 FIFA 22 – Pique Vs Sule Which Showdown SBC Card to do? Bayern Vs Barca

So based on real-life match fixtures EA would give us two players selected from the respective teams. Over here we have Sule and Pique from the UEFA Champions League fixture Barcelona vs Bayern Munich which is going to happen on the 8th of December at 20:00 hours UK time.

Which SBC to do?

Let’s cut to the chase now. This is what we are here for. Which SBC would be worth doing? For me to know which team will win is not possible. However, I can give you certain points which might help you make a decision.

Let’s check out the price of the SBC first :

Barca had been really poor in the UCL this year grabbing only 2 wins out of their 5 games. They have 2 losses and 1 draw. Meanwhile, Bayern Munich looks strong like always winning all 5 of their UCL games.

Also, the last time these teams met was in Camp Nou which is Barcelona’s Home ground. And Bayern won that game 3-0

The match took place on the 15th of September 2021 and this is the official score.

According to what we see over here Barca does not look strong enough to defeat Bayern Munich in Germany. I do not see that happening in any way. Bayern is the stronger team and according to me they will come out stronger and snatch a win.

Therefore this makes it much easier to choose between the Showdown cards that we have. Niklas Sule is obviously the better choice since he will get a +2 upgrade if Bayern wins (which I personally feel they will).

However, this is for people who want to save fodder. If you have enough of them the cleverest thing to do would be to get both of them. In that case, you get to use either one of them when they get an upgrade.

It also kind of depends on the team you have. If Pique fits in perfectly you can obviously do the SBC. We all remember the Scream Pique card years back and how overpowered it was. Pique with 80 paces would be insanely good trust me. He is 6’4″ and he has the physicality. He has decent Balance and Agility for a defender. As a card Pique would obviously be good. But that is not what the showdown SBC is for. We are not going to spend 130k worth of fodder for a card that does not get upgraded. So, from what I feel Sule would still be a better choice since I do not see Barca winning that game unless they pull off a miracle.

If this guide was helpful please let us know in the comment section below. Also, feel free to discuss which one you think would be a better SBC to do.