This article will help you complete the new TOTY Flashback Rafael Varane SBC at the cheapest value. 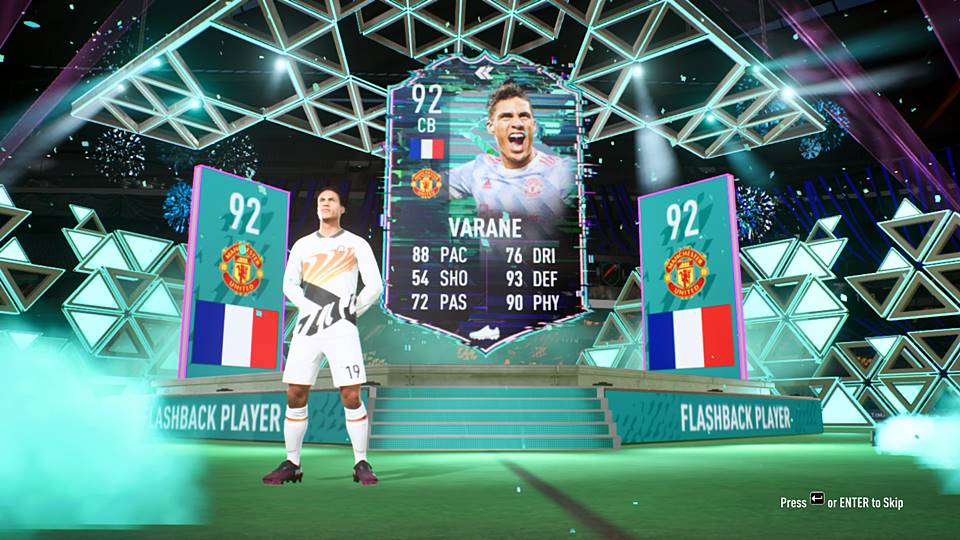 FIFA 22 – Raphael Varane Flashback SBC Cheapest Solution / Should you do it ?

Alright, he is finally here, the TOTY Flashback Raphael Varane . His gold  card is still undoubtedly one of the best defenders in the game. Just imagine how good the Flashback would be. He has the pace , the defending and the physicality to literally bully every forward in the game. I bet this guy would probably be the best defender in the game until we get Team of the Season.

There would be a lot of people who might be struggling to get the SBC done and that is why I would be helping you all out with the cheapest possible squads you can actually use to complete the SBC at the lowest value. I will even try to explain the requirements for the SBC just so it becomes easier for you to get it done on your own.

Let us first check out the total price required to complete the SBC on all platforms.

This time it is the Xbox platform that has the cheapest value. You can obviously use the fodder in your club to reduce the total coins you spend on the SBC. For people who might be new or do not know this amount is basically the coins required for fodder or players to submit in the SBC. It is the cheapest price at which you can actually complete the SBC.

The Cheapest Solution / Method for the SBC :

Now we shall look at the squads required for the SBC and the cheapest way you can complete them . It seems like you have to submit 7 squads for this SBC.

Squad 1 : Past and Present

This is the first squad that you have to submit. Lets quickly take a look at the requirements for this one:

This squad here is the cheapest one you can submit. Go ahead and copy the squad if you want or make changes according to the fodder or players you have in your club.

This is the second squad right here. Lets talk about the SBC requirements for this one :

This is the cheapest possible squad you can submit. Correction : *Use gold rare Thiago Silva instead of his Special Card*.

This would be the 3rd squad and here are the requirements for this one :

Here is the cheapest solution to the 3rd squad. Feel free to copy the squad.

Here is the 4th squad and its requirements :

Here is the cheapest squad you can submit.

This squad would be the 5th and as the name says you would need a 87 rated  squad. Here are the requirements :

Since you do not have a high requirement for Team Chemistry you can actually play around with the squad a bit and use players out for positions to get the best value for coins. Here is the team which would be the cheapest for this squad.

The 6th squad would also be an 87 rated squad. Here is what the requirements look like :

This squad actually requires a TOTW card which makes it a bit more expensive than the last one. Here is the cheapest solution to this particular squad.

The 7th and the final squad would be an 88 rated squad. Here are the requirements :

Here is the cheapest solution to the last and final squad of the Flashback Varane SBC.

Should you do this SBC ?

Well, to be honest this SBC is very expensive. It might be difficult for most people to actually complete this SBC. For what he gives you in game I think this could be quite good for the value. I still find people, infact even players from the Elite Division uses this guy along with Kimpembe. Most of the time we focus so much in buying attackers that we forget about building a strong defense. Trust me defenders are as much responsible for your wins as the strikers. You just do not see it so often since you do not score with them.

Varane is French and we know how much EA loves the French players. He would be the easiest link to Premier League , Ligue 1 and French teams. He has been a meta defender in the previous title as well. If you have the fodder , I would say take the risk and get this SBC done. You would not regret it. Open the 83+ * 25 pack from icon swaps or even the 82+ * 25 squad for more players whom you can use as fodder.

Lets say if you have like 600k coins and you can complete this guy within 500k then it would actually be good value. Or even if you could complete this SBC within 600k , I would say do it. If you are going over 600k then it completely depends on how much coins you have. if you have above 600k and you willing to take a risk then do this SBC for sure. Performance wise he would not let you down , trust me on this. You just need to manage the coins. If you can , then he is a must do SBC.

If the guide was helpful please let us know in the comments section down below.