Trying to build a good team in FIFA 23 Ultimate Team but you have only 100k? No worries, that is enough for you to build a full meta squad this year.

This guide will help you build the best squad that you can have within 100k coins.

FIFA 23 Ultimate Team is the most competitive game mode created in FIFA. It is the most popular as well. It is definitely enjoyable but sometimes FUT becomes really stressful. Especially when you are struggling to build a good squad and you constantly face opponents having Mbappe, Neymar, and all the other good players.

I know skill matters in FIFA but you cannot really do much with a weak squad especially this year when dribbling feels extremely slow. There is a huge difference between meta players and regular non-meta players this year.

This is why you need to constantly keep upgrading your squad with meta players throughout the year. It is a little sad because I would want to enjoy the game with my favorite players but sadly most of them would be non-meta and unusable in the game.

Therefore we have the best 100k squad for you guys that you could use early on in Division Rivals and FUT Champs.

There are many players who are really good in FIFA this year. Selecting the best 100k squad was actually tough. I personally felt that players with higher overalls felt a lot good in the game than someone with better stats and lower overalls provided they had decent meta stats. There is also this in-game effectiveness that matters a lot this year.

The price difference between PC and Consoles (PlayStation and Xbox) is huge so far this year. It is around 50k. Trying to build a 100k squad keeping both platforms in mind would be stupid since a 100k squad on PC would be like a 50-60k squad on the Consoles.

The consoles have the majority of players which is why we will consider the console prices for the players we are using in the squad. 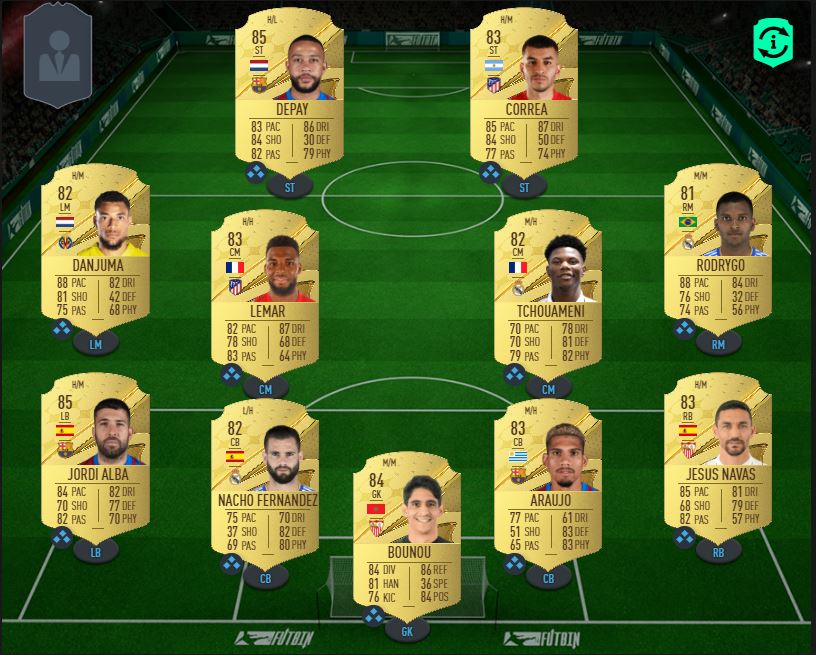 This is the best 100k Squad that you could build according to me. Players with high dribbling are meta this year and this is why we have decent dribblers all around.

This squad would cost you around 90k in the consoles and 142k on PC. Player prices would go up which is why I showed a 90k squad instead of a 100. Trust me within 100k you would not get a better squad.

You may find players with 90+ pace at lower prices but trust me the in-game effectiveness matters a lot this year. I have seen players like Gerrard Moreno outpacing my defenders with 75 pace. I have seen Joao Felix running past my defenders like flash.

I do not really understand the stats on the cards at times. But one thing I do understand is that some cards tend to make fewer mistakes than others. You may use a 90 pace full back but if he does not have good defending he would not be able to cover or tackle properly. So the pace would be useless for you if you do not have good enough defending.

Players like Alba do not have good defending but will still stop the attackers. Depay is not lightning-quick but will still get past defenders with ease and she shoots like a monster. Maybe these players are programmed differently to ensure they perform well in-game.

There you go, that is it on the best 100k squad that you can build in FIFA 23 Ultimate Team at the moment.