This guide will help you complete the First Owned objectives under Milestones in FIFA 23 Ultimate Team. 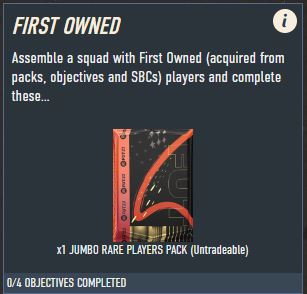 FIFA 23 Ultimate Edition is finally out on all platforms and I had never been so excited before. I have this feeling that FIFA 23 would actually be the best one yet since this is the last installment with the name FIFA. We are still going to get a football game from EA though but with another name.

FIFA 23 Ultimate Team is perhaps the most played game mode every year. This time EA had already dropped Milestones and Objectives for users even before the game even began. If you go to the Milestones section of the game you would find so many objectives to complete which I recommend doing at all costs since you would be getting pretty good packs as a reward.

The First Owned Milestones has 4 objectives that you need to complete in order to get the whole set done. Let’s talk about the objectives and how you could complete them easily.

First Owned Success: You have to win 3 matches in any FUT game mode (Squad Battles, Division Rivals, or FUT Champs) while having 11 first-owned players in the starting 11. First Owned players are basically the ones whom you pack or get from objectives. You have to go to the player bio and check if the number of owners is 1. This means you are the first owner of that card and the card can be called first owned.

First Owned Goals:  You have to get a total of 50 goals with first-owned players in Squad Battles with minimum World Class difficulty or higher or in Division Rivals. This objective could be done in Rivals too. Make sure the attackers are all first owned to increase your chances of getting a goal with one.

The faster you complete the better it is since the packs that you are getting from the objectives are pretty good. A Rare Players pack and Jumbo Rare Players Pack early on in FUT make a huge difference.

There you go, that is it on the First Owned Objectives and you can easily complete them under Milestones in FIFA Ultimate Team 23.

f the guide was helpful. Please let us know in the comment section below. And also follow FPS Index for more guides related to FIFA 23.