This article will help you in completing the new free objective Out of Position promo card in FIFA 23 Ultimate Team, Callum Hudson-Odoi quickly.

FIFA 23 – How to do Hudson Odoi Out of Position FAST

It is Friday and as we all know, it is the “promo day” of the week.  This promo is called Out Of Position and runs on a very similar concept as the Shapeshifters promo that we had for the last 2 years.

The promo team 1 looks pretty sick, to be honest, and like every other time, EA has dropped a free objective card, Callum Hudson-Odoi.

Hudson Odoi is an English footballer who plays for Leverkusen in the German Bundesliga.  He is originally a Left Winger but since this promo is about shifting the positions of the players, we have a Left Wing Back Version of the card.

His defensive stats really good for a free card. I would recommend everyone to go ahead and get this card if you have a Bundesliga hybrid with English players from Premier League or if you need an English player in the squad. If not, get him done for fodder at least.

How to Enter the Managerial Masterpiece FUT Friendly Mode :

In order to unlock this card you need to complete certain gameplay objectives under the FUT Friendly Mode: Managerial Masterpiece. Here is how you need to set your team up for the mode : 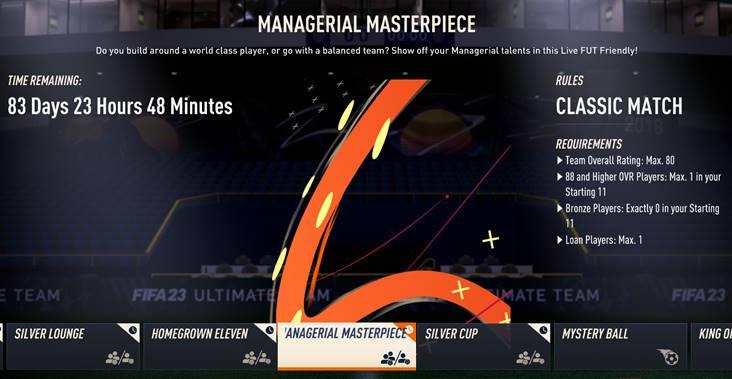 Now that we know how to enter the Friendly Mode, let’s quickly check out the objectives and how you can easily complete them.

5 Back: You need to play a 5 at the back formation. Any 5 defender formation would do. If you need a good one then check out our Custom Tactics and Formation guide for the 5-2-1-2 and the 5-1-2-2 which are the most meta 5 defender formations in FUT 23 at the moment. You can also change the formation to 3-5-2 in-game if you want to get a little bit more offensive.

Winged Attack: You need to Score 4 goals with Left Wingers who have 80 or higher pace. Rafael Leao, Nunez, Werner, Mbappe, Son, and there are many more. The position on the card needs to be LW and you can use Position Modifiers to change the position as well.

Tactical Genius: You need to Score and Assist in the same game using RW players in 3 separate matches.

Victorious in Germany: You need to score with Bundesliga players in 6 separate Wins.

That is all that you need to know about completing the Out of Position Callum Hudson Odoi objectives quickly in FUT 23.