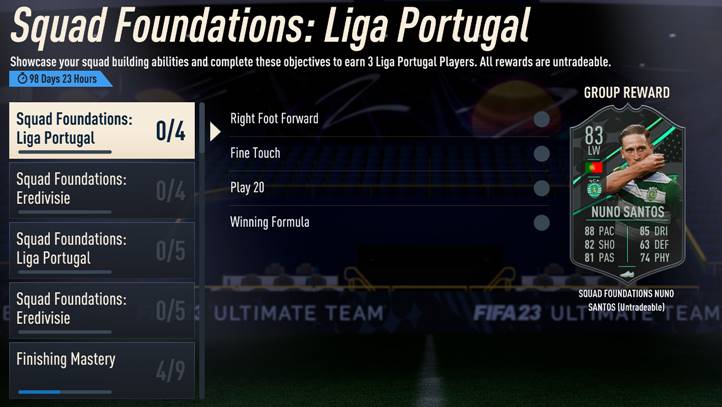 The Liga Portugal Squad Foundations is finally here and we have ourselves some pretty interesting cards here.

If you want a complete guide on how to complete the Squad Foundations Abel Ruiz objectives quickly. then click here.

In this guide, we would be discussing how you could easily complete the objectives and get all 3 cards.

Unlike Abel Ruiz, this one does not have a dedicated friendly mode where you can complete the objectives.

Right Foot Forward: You need to Assist 10 goals in total with Forwards in Squad Battles on Semi-Pro difficulty or higher or in Division Rivals. Forwards include LW, RW, RF, LF, CF, and ST. The card needs to have at least any of these positions to be counted as forward. So you might want to change your RM to RW, and LM to LW and start with a 4-2-4 formation to get more forwards involved in the game. Complete this objective to get Sonora.

Fine Touch:  You need to score a total of 7 finesse shot goals with Liga Portugal players in Squad Battles on Semi-Pro difficulty or higher or in Division Rivals. Try playing 2 strikers and pass to the second striker when you go 1 v 1 with the keeper. Then finesse it in.

Play 20: You have to play 20 matches having at least 7 or more Liga Portugal players in your starting 11. You can do this in Squad Battles on Semi-Pro difficulty or higher or in Division Rivals.

Winning Formula:  You need to get a total of 8 wins by a margin of 2 goals while having 7 Liga Portugal players in the starting squad. You can do this in Squad Battles on Semi-Pro difficulty or higher or in Division Rivals. This does not mean you have to get a 2-0 victory. It means that you need to score at least 2 goals or more than your opponent.  This would give you Wilson Manafa as a reward.

There you go, that is all that you need to know on how to easily complete the Nuno Santos Squad Foundations Liga Portugal Player Objectives.