Struggling with the Rulebreakers Breakout objectives?

Need a way to get them done quickly?

Well, I have just the right guide for you. Let’s find out how we can easily complete the Rulebreakers Breakout objectives in FIFA 23 Ultimate Team. 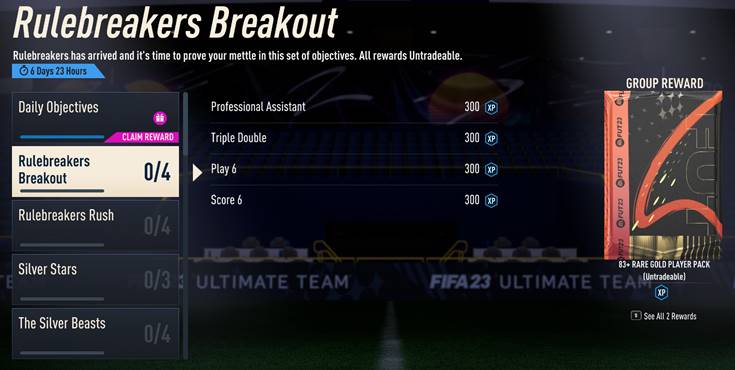 FIFA 23 How to do Rulebreakers Breakout Objectives FAST

Rulebreakers is the second promo of the year and the team looks fantastic so far. This is, however, the first promo where the players actually have boosted stats.

The idea for this promo is to boost certain stats on players while reducing certain other stats to balance things out. A perfect example would be a slow striker with good shooting who might end up getting a speed boost and a shooting nerf.

Along with a free objective card Paulinho, EA has also dropped another set of objectives with decent rewards. If you were saving packs for this promo then you should definitely get this done.

Here are the objectives and how you could easily complete them. Unlike Rulebreakers Paulinho this one does not have any dedicated friendly mode where you could do the objectives.

Professional Assistant:  You need to assist 5 goals with crosses while having at least 3 or more Bundesliga players in your starting 11. You can do this in Squad Battles on at least Semi-Pro difficulty or higher or in Division Rivals.

Triple Double: You need to score at least 1 goal per game for 3 separate games while having 3 Serie A players in your starting squad. in Squad Battles on at least Semi-Pro difficulty or higher or in Division Rivals.

Play 6: You need to play 6 Squad Battles on at least Semi-Pro difficulty or higher or in Division Rivals while having 3 or more La Liga players in the starting 11.

Score 6: Score 6 goals with players having 78 shooting or higher while having 3 or more Premier League players in the starting 11. You can do this in Squad Battles on at least Semi-Pro difficulty or higher or in Division Rivals.

That is how you could get the objectives for Rulebreakers Breakout done pretty quickly.