Here is a guide, that would help you complete the objectives really quickly in FIFA 23 Ultimate Team.

FIFA 23 How to do Rulebreakers Rebels De Jong FAST

It is week 2 of the Rulebreakers promo and we have ourselves another amazing free objective card. This time it will be the Dutch striker Luuk De Jong who plays for PSV Eindhoven.

If you have seen the gold card of this player you would know immediately how much of an upgrade this Rulebreakers version is over the gold one. His 79 rated gold card has 48 pace and that is something that made the card unusable.

EA has literally upgraded his pace by 38 which is the most insane pace upgrade I have seen on a card this early in FUT. On top of that, he is 6’2″ with 70 agility and 85 strength which makes him a Lengthy Acceleration type which is super meta as of now.

These guys, even though they have low acceleration can outrun any defender when they get going unless the defender is Lengthy himself. But if you can time your through balls correctly then I do not find any reason why they cannot go through on goal. He has brilliant shooting as well.

The only downside will be the links for this card and that is why he is free to get.

Like last week, we would have to play all the objective matches in the FUT Friendly mode Rulebreakers Rebels. Here is how you enter the mode : 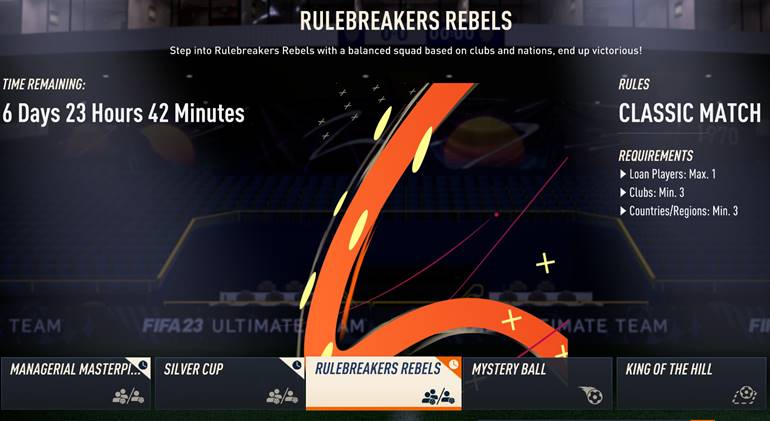 Now that we know how to easily enter the Friendly mode, let us focus on the objectives.

Dutch Delight: You have to score a total of 7 goals with Dutch players. Make sure you have Dutch attackers.

Master Vision: You need to get 6 assists from through balls with players from the Eredivisie. Try to use more Dutch players in the squad.

Sensational Brace: You have to score at least 2 goals with a Dutch player in 7 separate matches. Win or Loss does not count. As long as you get 2 goals with any player from the Netherlands, you are good to go.

That is it on how you could easily get the new Rulebreakers Rebels Luuk De Jong objectives done in FUT 23.

Please let us know in the comments section down below. Also, check out our website FPS Index for more FIFA 23 Ultimate Team guides throughout the year.