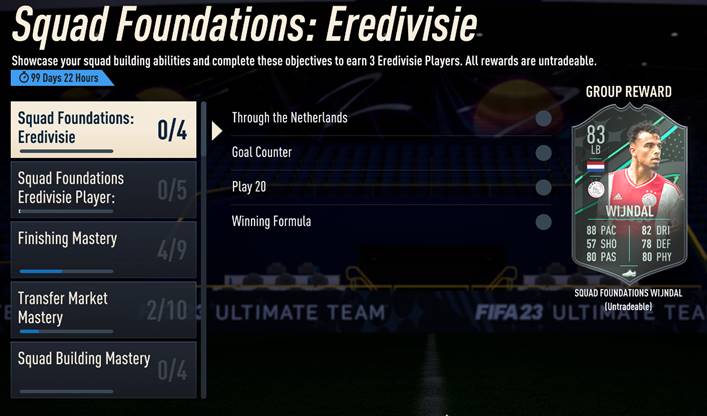 FIFA 23 How to do Wijndal Squad Foundations Eredivisie FAST

EA has just dropped the new Squad Foundations promo. It is not like the regular promos. Squad Foundations are normally aimed at the leagues which are not in the top 5. Like the MLS, the Eredivisie, the Liga NOS etc.

We would be getting a series of players from these leagues through SBCs and objectives. Today we have the Eredivisie Squad Foundations players Wijndal and Pedro Marques who look pretty good on paper.

If you are looking for a guide on Pedro Marques, go ahead and click over here.

Wijndal is a Left Back who plays for Ajax.  The stats on his card is pretty sick at this point in the game. However, I won’t be surprised if his 2-star weak foot lets you down. Imagine making a bad pass in defense. The worst thing you could probably do.

The best thing bout this set of objectives is that you not only get 1 but also 2 more Squad Foundations Eredivisie players  Geertruida (RB for Feyenoord) and Bazoer (CM for AZ). Bazoer is a great card to have in the squad. He is a pretty good box-to-box CM who could almost do everything for you on the pitch.

Like the other objective Pedro Marques, this one does not have a dedicated friendly mode. Here is how you could easily complete them :

Through the Netherlands: You have to get a total of 7 through ball assists with players from Eredivisie in Squad Battles on Semi-Pro or higher difficulty or in Division Rivals. Complete this objective to unlock Geertrudia.

Goal Counter: You have to score a total of 10 goals with Eredivisie players having at least a 4-star weak foot or higher. You can do this in Squad Battles on Semi-Pro or higher difficulty or in Division Rivals.

Play 20: You just need to play 20 matches while having 7 or more Eredivisie players in your starting 11. You can do this in Squad Battles on Semi-Pro or higher difficulty or in Division Rivals.

Winning Formula: You need to win 10 games while having 7 or more Eredivisie players in your starting 11. You can do this in Squad Battles on Semi-Pro or higher difficulty or in Division Rivals. Complete this objective to unlock Bazoer.

I would suggest doing the objectives in Squad Battles as trying it out on Division Rivals would be too tough. Rivals is full of sweaty players this year and using low-rated Eredivisie players against the overpowered full-meta squads would be a tough job.

Also, unlock Pedro Marques first and then do these objectives. Pedro has a 4-star weak foot which you can use to complete the Goal Counter objective easily.

There you go, that is all on how you could easily and quickly complete the objectives for Squad Foundations Eredivise Player Wijndal.