This guide will help you complete the Black Friday Cup objectives easily.

FIFA 23- How to Get Wins in FUT Black Friday Cup

It is Black Friday today and EA has dropped a new Road to the World Cup promo along with World Cup Icons. I am absolutely enjoying the amount of content EA has to offer during the World Cup.

If you look at the Icons list, I would say they are pretty good. Especially, since many of them have 5-star WF and 5-star SM upgrades. They could even be better than the Prime Icons which are supposed to come out later in FUT.

These icons along with RTFWC items are currently in packs. And what is the best of getting ridiculously good packs on minimum m grinding? Yes, through another cup-based objective called the Black Friday Cup.

These cup-based objectives focus only on wins, so you could play as freely as you want. Collect the wins to get amazing pack rewards. In case you are lucky you might pull out one of these World Cup Icons which are released today.

Like every other cup objective, we have a dedicated Friendly mode for this one too, called the Black Friday Cup. This is how you need to arrange your squad to enter this mode: 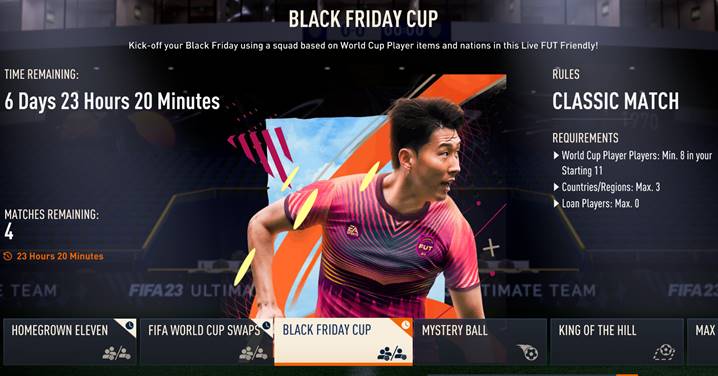 Like the Path to Glory Cup, there would be matches played under the Classic rules. In previous years, we would normally have the Golden Goal rule. However, this one is just about playing a normal match with regular FIFA rules.

Here are a few tips that you should follow in order to get maximum wins in the Black Friday Cup:

There you go, that is it on how you can easily get wins in the Black Friday Cup in FUT 23.

I hope the guide was helpful. Please let us know in the comments section down below. Also, follow FPS Index for more FIFA 23 guides.