Are looking for a way to get more World Cup Players other than the free ones you received from EA on November 11th?

Well, here is how you could easily earn many World Cup players for completing the objectives.

The World Cup campaign has begun and we have ourselves the FIFA WC Swaps, the Path to Glory promo as well as World Cup Heroes. This has never happened before, as today we are kind of getting a 3-in-1 promo.

The World Cup Swaps are basically like the icon swaps where you exchange swap tokens for rewards. This concept was introduced last year and people loved it. The tokens could be received from tokens hidden in daily objectives and SBCs.

However, to complete the objectives that we currently have in the game in exchange for token rewards, we would have to use World Cup players. When you logged in today EA had given you a free FIFA WC Pack. 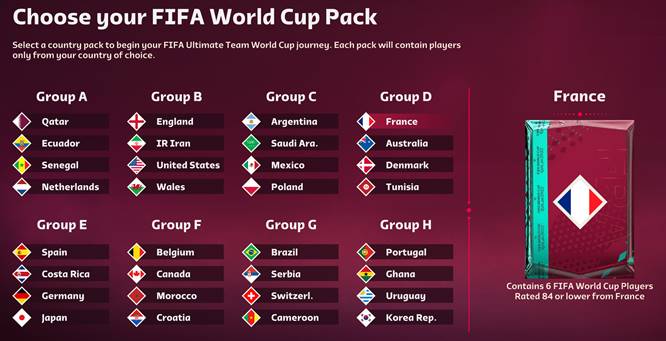 You could choose any country of your choice and get World Cup players which are 84 rated or lower.

Where to get World Cup Players?

In order to complete the new FIFA World Cup Swaps Week 1 objectives you would have to use World Cup Players. The milestone objective would be there for like 42 days so you do not have to worry about time.

However, completing it quickly would give you 8 easy swap tokens which you could redeem if you want to.

So how do you get World Cup players?

Well, there is another objective that was added today by EA called FIFA World Cup Swaps Showcase 1. 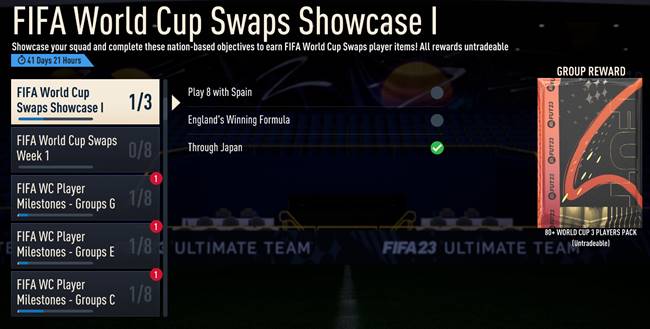 There is also another set of objectives called the FIFA WC Player Milestones- Group A to H.

These are 4 sets of objectives each with teams representing two groups from the FIFA World Cup 2022. 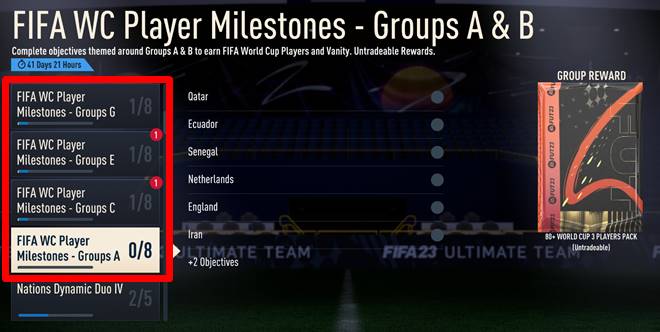 For example, if you are doing the FIFA WC Player Milestones Group A & B then you would have to complete 8 objectives in total (since there are 4 countries in a group ).

The objectives are very simple. You just have to score 1 goal with a player in any FUT Game Mode (Division Rivals, Squad Battles, or FUT Champs) belonging to the nations mentioned in the objectives.

So if I score with a player from the Netherlands, I would be getting a Netherlands Essentials Pack that would give me 6 Netherlands World Cup Player cards.

Similarly, I completed 1 goal with a player from Portugal and I got this:

Remember, that the WC Player Items will only be available to you for 54 days only (11th Nov – 4th Jan).

You can also get Essentials Pack from the first Season Objectives

This is a 5 World Cup Players Pack. You would be able to get 5 World Cup cards when you open it.

You can also get World Cup Player Items from the Store as well.

These promo packs give you World Cup Player Picks out of 2.

Apart from these sources, also keep an eye on daily SBCs and Objectives. The more players you gather the better rewards you get.

Currently, I am in Level 2 as I have gathered 31 players. To get to level 3 I would need 50 players. The rewards would get better as you go high up the level tree. To get to Level 10 you would need 750 players.

You would get them over time. So there is no reason to worry.

Keep an eye on Milestones, Objectives, SBCs, Season Rewards, and the Store. The moment you see there is an Essentials Pack or a World Cup Player Item as a reward, complete it. I would not recommend buying packs from the Store though. However, it is completely up to you.

There you go, that is how you can easily get World Cup Players in FIFA 23 Ultimate Team to complete the new FIFA WC Swaps Week 1 Milestone Objectives.