How to do Kick Start 4 Objectives FAST in FIFA 22

We are just almost 20 days from FIFA 23 and EA has just dropped the 4th Kick Start objective called the FUT 23 Kick Start IV.

The Pre Season is the time of the year when you earn packs not only for the current FUT but also for the next one. So basically you would be getting player packs for FUT 23 and this will be available after October 13th, 2022. This is why I recommend completing all the Pre Season objectives just to get a good head start for next year.

This time you would be getting Kick Starter pack 4 which has 9 Rare Gold players belonging to the countries Brazil, France, Belgium, Poland, and Spain.  Now we all know how good the French players are in every FIFA. So are the Brazilians. Imagine getting Mbappe or Neymar from this pack.

The FUT 23 Kick Start 4 objectives will also have the same dedicated friendly mode called Kick-Start where you would have to arrange a squad according to the rules and then play your matches. 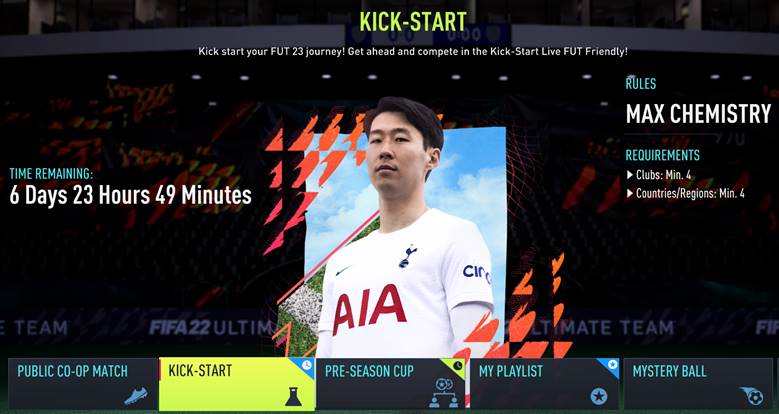 Max Chemistry is where you get complete freedom to play whichever player you want in whichever position you want. Chemistry does not mean a thing since you will start of with full chem for everyone.

Now that we know how to set up the squad for the friendly mode, let’s talk about the objectives and how they can be easily done. This time instead of Leagues we have clubs as the focus.

Spain: You have to score in 3 separate matches with at least 5 or more Spanish players in the starting 11.

Poland: You have to score in 3 separate matches with at least 5 or more Polish players in the starting 11.

France: You have to score in 3 separate matches with at least 5 or more French players in the starting 11.

Belgium: You have to score in 3 separate matches with at least 5 or more Belgian players in the starting 11.

Brazil: You have to score in 3 separate matches with at least 5 or more Brazilian players in the starting 11.

Well, the objectives are as easy as it gets. I would recommend everyone complete all of these objectives.

I hope the guide was helpful. Please let us know in the comments section down below. Also, keep following FPS Index for more FIFA 22 related guides and content.