This guide will help you complete the new Summer Swaps II objectives under Milestones in FIFA 22 Ultimate Team.

How to do Summer Swaps 2 Objectives Fast in FIFA 22

We have the second set of Summer Swaps 2 objectives out today. Like last time this one too would be based on Nationalities.

The Summer Swaps campaign is looking fine so far. If we calculate the tokens we are getting in this objective then it would sum up to a total of 26 tokens. If you want a tracker that tells you where to look for tokens in the game you check out ours.

Here is a link to our Summer Swap 2 Token tracker. We also have respect guides for objectives and the cheapest solutions for the SBCs as well.

The Summer Swaps 2 objectives would give you 8 tokens in total. I do not feel it would be that difficult to get these 8 tokens. All you have to do is just grind a bit.

How to get access to FUT Friendly Mode One Nation :

The FUT Friendly Mode One Nation is very similar to One League. You would have to arrange a squad according to the rules of this mode and then play your friendly games. 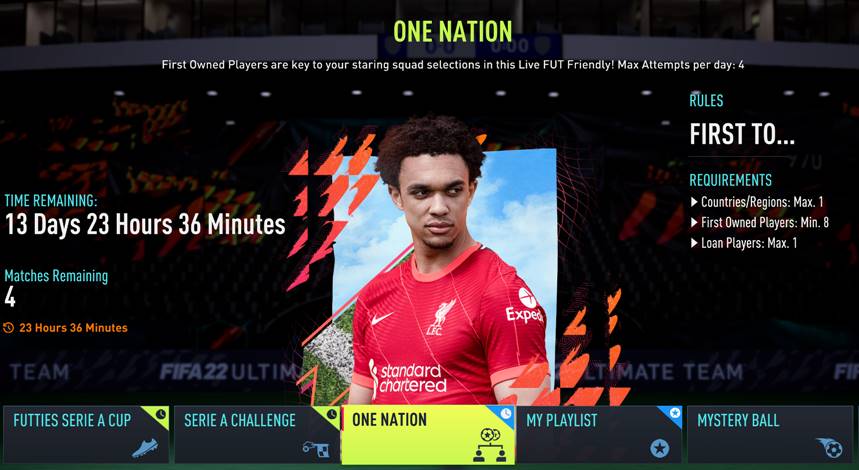 Let’s talk about the objectives now :

Win 4 Argentina:  You have to get 4 Squad Battle wins on Professional or higher difficulty with a squad of 11 Argentinian players. Try subbing in better players to make the match easier in case you do not have a good squad.  As rewards, you would be getting 1 out of 3 84+ player pick and 2 Summer Swaps 2 Tokens: Abqar and Majetschak.

Win 4 Brazil: You have to win 4 Squad Battles matches with 11 Brazilian players in your starting lineup. The difficulty should be professional or higher and you can sub in better players after kickoff if your starting 11 is not good. Rewards will be 1 out of 3 84+ player pick and 2 Summer Swaps 2 Tokens: Youssef and Camara.

One Nation Portugal:: Use an entire Portuguese Squad (starting 11 + bench) under the FUT Friendly mode One Nation (rules discussed above) and get 4 wins. Rewards will be 1 out of 3 84+ player pick and 2 Summer Swaps 2 Tokens: Sinayoko and Yildirim.

One Nation France: You have to use an entire squad of French players including the bench under the One Nation mode and win 4 matches. Rewards will be 1 out of 3 84+ player pick and 2 Summer Swaps 2 Tokens: Djoco and Sowerby.

There you go, that is it on the Summer Swaps II objectives and how you could complete them quickly.