This guide will help you complete the Summer Swaps IV Objectives under Milestones in FIFA 22 Ultimate Team.

How to do Summer Swaps 4 Objectives in FIFA 22

Well, we are at the end of the Summer Swaps 2 campaign and EA has just dropped the last set of tokens for the campaign. It will be another Summer Swaps token dedicated set of objectives that will give you the final 9 tokens.

Yes, this time we have 9 tokens in total instead of 8 tokens that we generally get through these types of objectives. The extra token is for completing all the objectives which I think is fair enough at this point in time.

How to Enter One Nation FUT Friendly Mode :

These objectives quite like the last one will again have the same dedicated Friendly mode One Nation. Here is how you enter the mode : 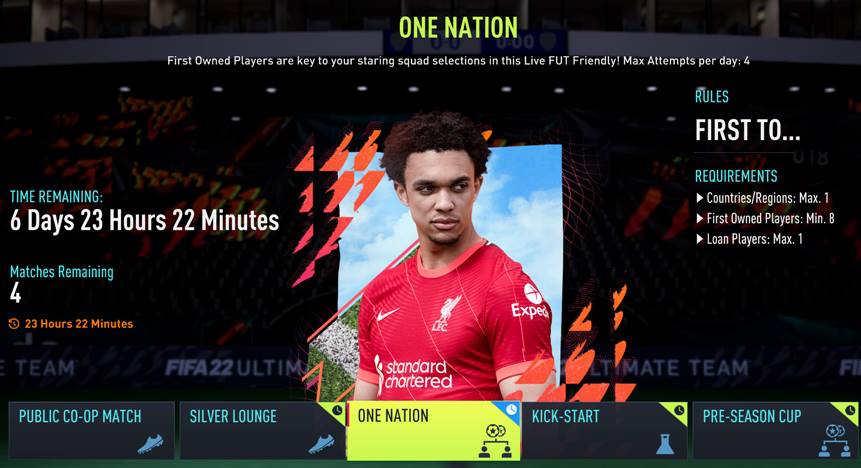 Let us talk about the objectives now :

Win 4 Poland: You need to win 4 Squad Battle games on minimum Professional or higher difficulty with 11 players from Poland in your starting lineup. You can always sub in better players after kickoff just to ensure the win. For rewards, you will get a 1 out of 3 84+ player pick and 2 Summer Swaps Tokens: Bertelli and Tracey

Win 4 Switzerland: You need to get 4 Squad Battle wins on minimum Professional difficulty or higher while having 11 players from Switzerland in your starting lineup. Sub in better players after minute 1 to make the game easier. For rewards, you will get a 1 out of 3 84+ player pick and 2 Summer Swaps Tokens: Lopez and Stenevic

One Nation Belgium: You need to get 4 wins in the Live FUT Friendly One Nation following the rules mentioned above with an entire squad of players from Belgium. Get rewarded with a 1 out of 3 84+ player pick and 2 Summer Swaps Tokens: Horvath and Isac.

One Nation Brazil: You need to win 4 matches in the Live FUT Friendly One Nation following the rules mentioned above, with an entire squad of Brazilian players. The reward will be a 1 out of 3 84+ player pick and 2 Summer Swaps Tokens: Zapata and Majrashi.

The final reward will be the 50th and the final Summer Swap 2 token: Taylor

There you go, that is it on the Summer Swap IV or 4 objectives and how you can get them done quickly.