We have all wondered why some characters are always dominant in-game, and why most of the online players we come across play with the same characters.

The truth is that some characters are better than others. Even though every character has his/her own strengths and weakness, it’s just that Mortal Kombat 11 is just not a balanced game. Some of the characters have fewer weaknesses and more strengths compared to others. To understand which character is right now considered to be the strongest or the weakest we can just take a look at the Mortal Kombat 11 Tier List. 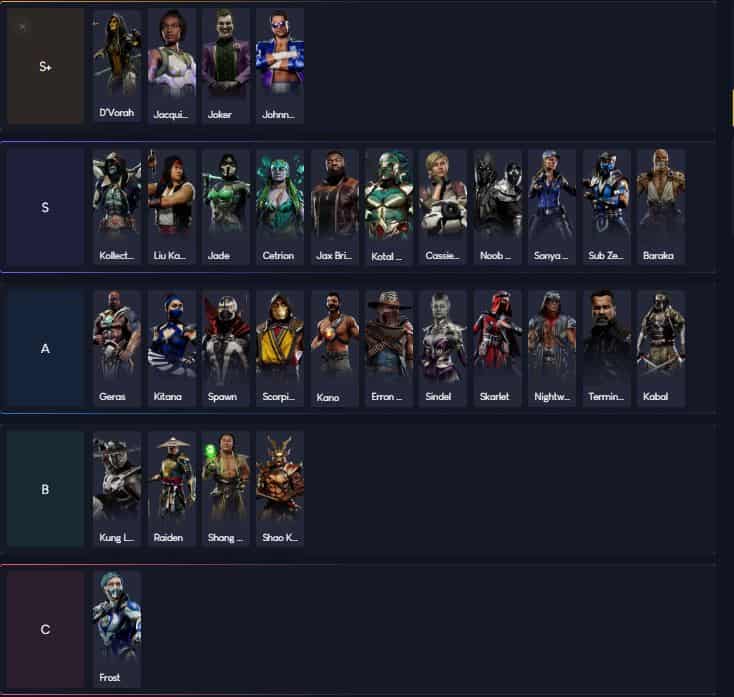 We have categorized the characters into S+, S, A, B, and C  tiers in decreasing order of effectiveness and skill level in-game.

The first question that will run through your mind is … “Why on earth is D’Vorah on S+?” Alright, we have all seen what Sonic Fox could do with D’Vorah. He can bring out the full potential of that character. The most deadly thing about D’Vorah is that she literally has 4 claws sticking out of her back. And what is the most deadly thing about the claws? You just cannot predict what her moves will be. The claws, confuse you, and you cannot predict the overhead or low attacks properly. She is fast and has special abilities which can actually aid her to keep the pressure on giving you very little time to breathe.

Johnny Cage as we all know deserves that tier. He has incredible range and is more or else safe on his strings. And of course, in the hands of someone like Sonic Fox, we could all see what he is capable of.

Jacqui Upgraded (3rd tournament variation) is what gets her on the list. We all witnessed the Upgraded Jacqui at Final Kombat 2020.

Joker has the highest arsenal of tricks up his sleeve. This character has some amazing overhead and low mixups and ridiculous damage. He has 340 base damage on a fatal blow and if done with a combo the damage can easily go above 420  in just a 2-hit combo cancel to a fatal blow. He has one of the fastest mid-attacks in the game.

Kotal Kahn and The Kollector are the highlights of this Tier. Kollector’s abilities had been showcased already by Sonic Fox and Kotal, well you can call him the “King of Whiff Punish”.

Jade has an amazing range she could make herself immune to projectiles. The thing we hate most about Jade is her annoying uppercut which has an incredible range.

Okay. We were super confused about whether to put Geras on S or A tier. The reason we have put Geras down a whole tier is only that we have all figured out his strings by now. Even though he has some crazy damage and crushing blows which are easy to pull off after the nerf, still somehow the number of Geras players has reduced and he just doesnt seem that overpowered anymore.

Spawn has incredible damage, over 350 damage in just 1 offensive bar making him perhaps the highest when it comes to damage without Krushing blows. But at the same time Spawn is an unsafe boy. It is pretty easy to counter Spawn and that is what makes him weak. He is the newest addition to the list and we are yet to see how strong he can actually be. For now, the A tier just seems about right for this bad boy.

Eron Black after the nerf has rightfully dropped down a whole tier and we don’t see as many players using him now as before.

The most unsafe character in the game now is Kung Lao which is why he is placed on B. Even the Shaolin has some sick combos but he can be countered in almost every move. He has no Overhead attacks except for his teleport which is still an unsafe move to pull off since almost everyone knows how to deal with Kung Lao’s Teleport now.

Not many Raiden players out there, maybe because he is slow and unsafe. Not much we know about his full potential as a character yet.

Shang Tsung had been a powerful zoner always. You can literally slay him with a Jade or a Scorpion. When it comes to close combat somehow he is way too predictable.

Shao Kahn even with that extra 50 hp is predictable and feels slow. Not many pro players use him and we don’t have enough information about his abilities.

Frost is the only character we could put way down at C. This character has the moves but somehow she is not at all effective in-game. Her combo strings are extremely restricted. Her base combo strings are unsafe overall she does not feel that strong as a character.