This guide will help you fix random game crashes for Outriders Worldslayer.

A massive upgrade for high-intensity looter shooter, Outriders Worldslayer is a brutal 1-3 player co-op looter shooter set in a dark sci-fi universe. Begin with the original Outriders campaign or use the Level 30 Boost to jump straight into the Worldslayer content with a fully geared-up Outrider.

The game is finally out on all platforms and improves on the previous game in all ways. Better combat, extended build options, and even catchier one-liners make this game a must-get upgrade for those who have already played the last installment.

How  to fix Outriders Worldslayer Crashing :

A lot of users reported the game crashing randomly for no reason. Sometimes leaving a random error code, sometimes during startup, and even mid-game. If you are wondering what might be causing the issue then you have come to the right place.

Since it is pretty difficult to understand the exact cause for crashing we might have to carry out several steps and keep checking whether the game still crashes or not.

Well, let me tell you that Outriders Worldslayer would be an upgrade over the previous game. Hence the system requirements for the game stay the same. If you had been playing Outriders normally without issues then you might as well skip the step. It is for those who are new must know that they need to have the right configuration for the game. Trying to force-run the game on a weaker PC will only make the game crash.

Well, these are the requirements to play Outriders according to Steam. Anywhere between the minimum and recommended would be fine. However, below that would only cause the game to crash or you might end up facing severe performance issues.

The Antivirus could be the culprit :

Games these days come with protection technology. This is somehow recognized as a virus or malicious content by your Antivirus. This is why the exe file is blocked and the game cannot launch. Even if you manage the launch the Antivirus will eliminate the process causing the game to crash automatically. Turn off your antivirus and then play the game.

It is high time you upgrade from the older version of Windows. Games these days only run on Windows 10. Outriders Worldslayer requires a minimum build version of 1909 for win 10. This is how you check the windows version. 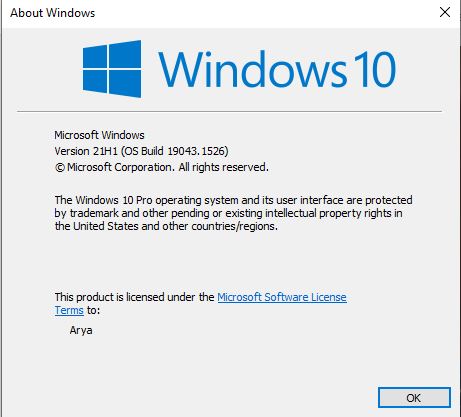 Make sure you keep updating your Windows. Win 10 receives a lot of updates to keep the bugs away. A buggy Windows update could easily cause games to crash on your PC.

Make sure you are running the game on a Dedicated GPU :

The problem with most Laptop users is that the game starts off on the Integrated GPU instead of the Dedicated one and most of the users would fail to figure out why the game is crashing. This is what you need to do :

If in case you get an error message “vcruntime140_1.dll missing” or “MSVCP140.dll was not found” on crash then this would mean that you do not have the latest version of  Visual C++ redistributable. Downloading it from here.

Overclocking could be the issue  :

GPU and CPU Overclocking could easily lead to the game crashing randomly or even at startup. Overclocking software or applications like MSI Afterburner and Zotac Firestorm does not work well with games these days. Hence I would recommend not trying to overclock and play the game at what your CPU and GPU could offer by default.

If this does not fix the problem then try Re-Installing the game as a last resort. It could also be a problem from the developer’s end. In such a scenario waiting for a patch fix would be the best thing to do since you won’t be able to fix the issue in any possible way.

1 thought on “Outriders Worldslayer – How to Fix Crash | Game Crashing”