This guide will help you understand how you can break the cage in a Hell in a Cell match in WWE 2K22. 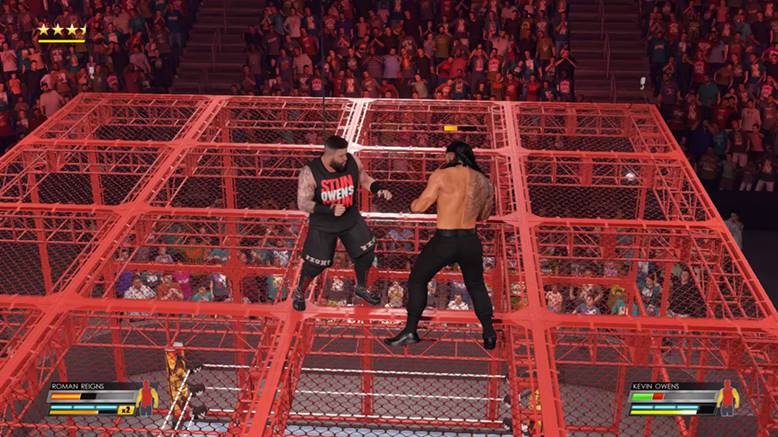 The first-ever Hell in a Cell match in WWE took place on the 5th of October 1997 in Bad Blood. A lot of us were lucky enough to witness the Undertaker going head-on with Shawn Michaels.

Wrestlers do go take a lot of risks when they try to pull off stunts like that. At the end of the day, they would do anything for making the match as entertaining as possible for the viewers. The Hell in a Cell is one of my favorite match types.

How do you break the cage and climb on top of the Cell?

Imagine playing a Hell in a Cell match and not breaking the cage. Imagine not climbing on top of the cage. Feel so incomplete, does it? This is why we are here. I will tell you how you can break the cage and climb on top of the cell.

The Cell is square in giving you an equal distance from the ring to the cell wall at all angles. Every corner will have two areas or rather blocks that can be broken. So the walls adjacent to the corners are weak.

That should be your spot. Go ahead and Irish Whip your opponent on that wall. On a few attempts, you will be able to break through the cage wall and land outside. You can also use grapple moves to break that wall. But it needs to weaken first.

Here is a video of what I am trying to say. Look at how Kevin Owens breaks the cage wall as he throws Roman out.

Once you are out of the cage press Dodge/Climb button which is RB in Xbox and R1 in PlayStation. When you climb up to the top your opponent will follow you there. Now you can enjoy wrestling on the top of the cage. The crowd will be louder when you reach there.

You can also throw a superstar off from the top of the cell. Just do a carry move and then press the Grapple button near the edge of the cell.

If you slam your opponent in the middle of the cell roof a few times, it may get weak and break off.

Over here you can see how Roman takes his revenge on Owen by suplexing him through the cell roof to the mat.

I hope you this guide was helpful. Please let us know in the comments section down below. Also, follow FPS Index for more WWE 2K22 related guides and content.