This guide will help you win ladder matches more often by guiding you on how you can easily complete the ladder match mini-game. 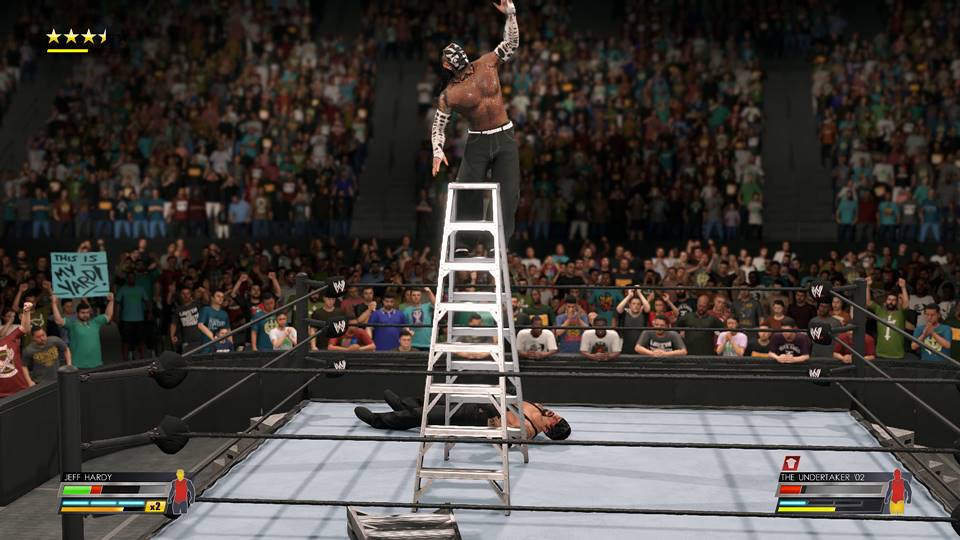 Even in the game I just love playing these match types. You can not only use the ladder as a weapon but also jump from the top of a ladder. Imagine doing a Swanton Bomb from the top of the ladder. Satisfying isn’t it? It sure is.

How to complete the Ladder Match Mini-Game to Win :

A lot of people are currently struggling with ladder matches. The reason is the mini-game at the end. It could be a bit confusing for a newcomer and that is what we are here for. Well, here is what you have to do.

Pick up the ladder by pressing the “Pick Up Object” button on the PC (” U ” default key), LB on Xbox, and L1 on the PlayStation. Now press the “Heavy Attack” button on the PC (K being the default key), A on Xbox, and X on the PlayStation, to set up the ladder. You have to set it up right underneath the Championship belt that is hanging above or the Money in the Briefcase whichever is on the line.

Next, beat up your opponent so that they are down and out.  Now climb the ladder using the “Dodge/Climb”  button on the PC (Default = O), R1 on the PlayStation, and RB on the Xbox. Once you are midway you get two options.

You can continue climbing by pressing the same button for climbing. This would get you right on top of the ladder from where you can use diving attacks or finishers (if your wrestler has an aerial finisher).  Or you can press the “Pick Up Object” button on PC (Default = U), L1 on the PlayStation, and LB on the Xbox to reach for the belt or briefcase.

However, you can rotate the ball too with the help of the Right Stick. So yes, use the right stick to move the ball to the right position and then shoot it through the gap with R2. You have to repeat this 8 times to get the Belt or Briefcase and win the match.

How to Complete the Ladder Match Mini-Game on a Keyboard for PC :

If you are on a PC and using a Keyboard then things would be twice as difficult for you. Keyboards do not have the Right Stick. So what do we do? How do we win Ladder Matches? Here is what you have to do.

In PC we have a modifier button that works as a right-stick modifier. By default, it should be your LEFT CTRL button. The right stick directions would be “I, J, K, and L” with I being up, J being left, K being down and L being Right. Whenever you press and hold down Left Ctrl and press I, J, K, or L  you are literally doing the right stick movement.

The same concept works in the mini-game. Instead of the right stick, you press Left Ctrl and move the ball with I, J, K, and L. When the ball is near the gap you press “Space” which will be the finisher modifier by default to shooting it through the gap. Do this 8 times and you win.

Remember that you do not have to do it 8 times whenever you climb the ladder. It is the total time that you have to do it. So basically if you have done it 6 times and then you climb again you would only have to do it 2 more times. Once you get the hang of it, it becomes very easy.

I hope the guide was helpful. Please let us know in the comments section down below. Also, follow FPS Index for more WWE 2K22 related content and guides.