New to MyGM Mode? Getting confused about what to do?

Well, you have come to the right place. We are here to discuss the MyGM mode and the concept that it runs on. What decisions should you make and how do you actually need to run the show? 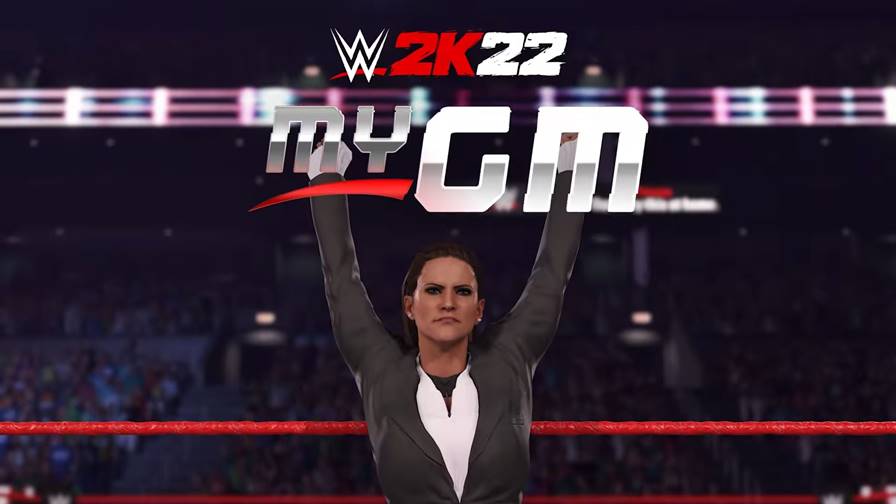 WWE 2K22 – How to play MyGM Mode | Guide for Beginners

Like I said before MyGM could seem very complicated at first. But once you understand the concept it would not seem so difficult. For beginners, the MyGM mode features you as the General Manager of a Brand. You have to manage your expenses and draft superstars and upgrade your show to make sure the fans are satisfied. At the end of the day, it is all about the business and the better you manage your show the more satisfied the audience would be and the more money you make. You can call it the battle of the Brands.

You can either choose any of the 5 default managers (Adam Pearce, Sonya Deville, William Regal, Shane McMahon, Stephanie McMahon) to begin the mode with or you can use your customized manager. You can use any customized character downloaded from the Community Creations or any Superstar you have created on your own.

Each Manager would have a Power Card. This is basically a statistical boost that you would get when you pick that manager.

If you ask me I would get Stephanie McMahon. Her power card would give me the extra cash to upgrade my show quicker and take advantage of the rival show.

Like I said before you have to manage a Brand in the MyGM mode. These are the  brands you are allowed to manage in this mode  :

If you choose to play against the AI you would have to select between 3 difficulties :

You can also choose the number of weeks you want :

No matter the number of weeks you choose the mode always ends with Wrestlemania being the last show. However, you cannot choose a duration of more than 50 weeks.

Drafting your roster basically means selecting the wrestlers for your brand. You need to manage your expenses and draft the right players. You just cannot have all the popular players as they would cost you more money than you have. Here are the rules for Drafting 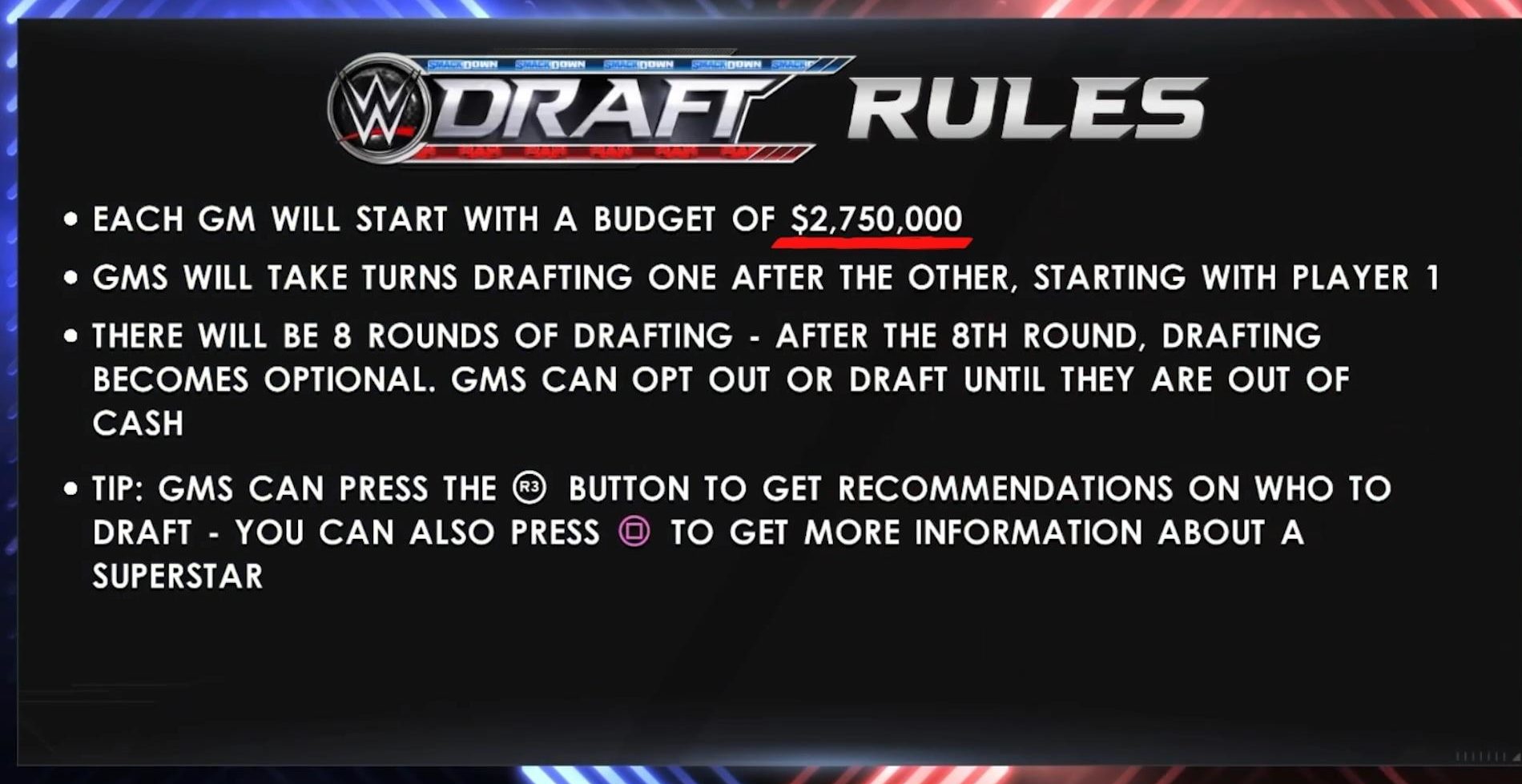 When you draft a superstar you would be able to see their Cost, Role (Face or Heel), Class, Stamina, and Popularity on the right side. There would be several classes of wrestlers such as Fighter, Bruiser, Specialist, Giants, Cruiserweights, and more. An important tip for beginners would be to use Giants and Cruiserweights in your roster and those two classes have exciting matches together. This makes the audience happy. It is also recommended that you keep some money saved after the draft to sign legends and also book special match types like Hell in a Cell.

After the roster is set you would have to choose Champions for your brand. Each brand would get a maximum of 2 champions: The Men’s (WWE/ Universal Title) Championship and the Women’s Championship.

The sad thing about this is that the mode does not feature any other championships. I wished they did because I was pretty excited about the tag team championships in My GM mode.

Roaster management would help you take your brand to the next level. You can easily do this through the option Manage Roster in the MyGM mode. You can release any superstar you want to and sign free agents as well.

You can also sign Legends by offering them a contract for a  period of time. Legends add popularity to your show and will help satisfy the audience. This will actually help you boost your show ratings and also add star power.

As superstars fight each other in the show they tend to develop rivalries amongst themselves. The more they interreact with each other the deeper the rivalry gets.

Rivalries can begin from run-ins, call-out promos, and placing the rivals in the same match. You can check a superstar’s card for their current active rivalries.

Rivalries give your brand better quality, more fan support, and higher revenue. So make full use of these rivalries.

WWE 2K22 MyGM mode only allows you to use 1 v 1 or 2 v2 match types for both genders. However, you cannot create a Triple Threat or a Fatal 4 Way match which is kind of a bummer.

However, you can select from a variety of match types each having its own cost and stamina requirement. You can also make those matches a Title or a Non-Title match. Booking Interference would cost you more money.

Every Superstar has their own Class and Role. We have often noticed that in wrestling there would be a group of good guys and a group of bad guys. The good guys are called Faces while the bead ones are called Heels. Squaring Faces against Heels is key to a good match score. Also, use these match types to get better match scores  :

Now if you book match types like TLC o or Hell in a Cell, it will cost you more but the audience would be extremely happy. Your show would get better ratings.

Promos are used to raise the popularity of superstars. These are the promo types you can use :

You know what I mean when I talk about “The Commissioner”. Yes, you have got the right. It’s “The Game” Triple H calling the shots. If you take a look in the Journal Tab you would see Triple H sending you messages. These are basically Commissioner Goals which are nothing but some things Triple H would want you to do in exchange for greater rewards.

For example, if he does not want a superstar to feature in the show then he would text you. If you listen to him you would get rewards like power cards. Listening to Triple H more often could actually bring down your Roster Morality.

WWE 2K22 MyGM does not only make you sign wrestlers and manage rosters. You would also have to handle Show Logistics. Every week you would have to choose a venue or an Arena where the show would be held, the type of Crew you want, and the Special Effects that are to be used. Use your cash to upgrade the Arena,  Crew, and Special Effects and in turn get a better response from the Audio and generate more revenue.

How to Play the Matches :

After you book the matches you have the option to either Simulate, Play or Spectate them. If you choose to simulate you would get an instant result of the match in the menu itself. You can choose to Play the match manually as one of the superstars. The new Spectate mode lets you view the ongoing match from various camera angles.

The Fix Match power card lets you select a winner of a particular match while Promos will always be simulated.

Whenever you finish a match you would be given an in-depth Match Report which would be a rating for the match and what the audience liked or dislike about the match. Say it is the Main Event and you use superstars who are less popular. The audience would not like it as much since they would want you to use more popular superstars for the Main Event.

At the end of each Show, you would be given a full report based on the overall Show and how it affected your Viewership and Revenue. The Social Media Tab on the right would give you hints and tips as to what the audience wants for the next show.

Can you Play Online?

Now the question that comes to our mind would be whether or not we could play this mode online with a Friend. Well, according to Design Director Allan Flores, there would be Co-op for the MyGM mode however it would only be possible locally with another controller. There would also be a little bit of Online with features like Steam Remote Play.

This really let me down as I wanted this to be completed online. There is absolutely no fun playing or competing against the AI for me personally.  However, I do feel things would be very interesting this year.

This is all that you need to know about the new MyGM mode in WWE 2K22. I hope this article was helpful. Do let us know in the comments section down below. Also, keep an eye on FPSIndex for more guides and WWE 2K22 related content.