WWE 2K22 allows you to literally set a table on fire and smash your opponent through it. If you want to know exactly how you can do this then keep reading. 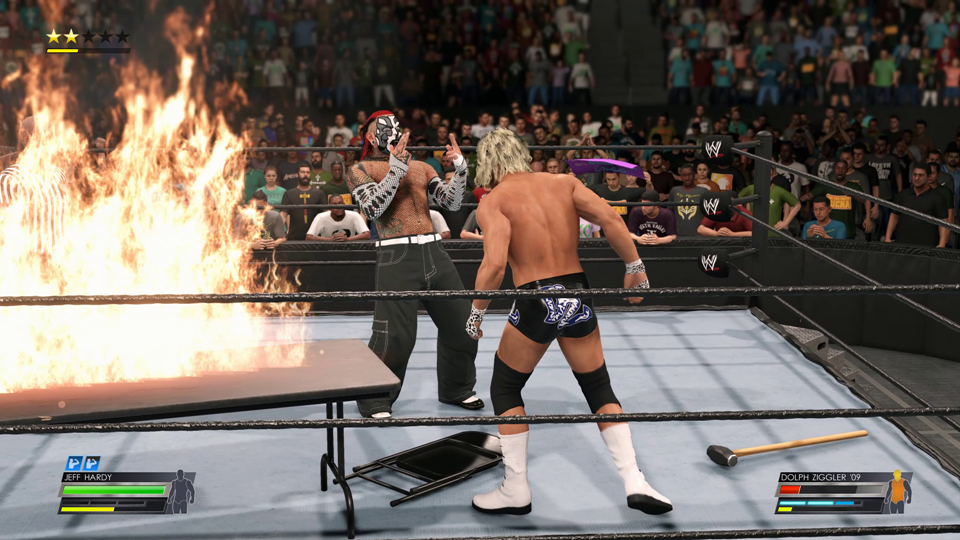 I remember Edge spearing Mick Folley through a flaming Table back in Wrestlemania 22. Trust me, that was one of the most epic moments I have ever seen. Hardcore matches were brutal back. It’s too bad we do not get to see this stuff now.

However, we can still re-live those moments when superstars used to literally go through a flaming table. Let’s say WWE 2K22 has done something which would definitely make us old fans happier.

Yes, we can ignite a table and then slam our opponents into it. So how do we do it? Well, Let’s find out.

Before we ignite a Table we need to know when can we actually do extreme stuff like these. Surprising fact is you cannot light the table on any match type. Not even in a Tables match. The only match type where you can actually ignite the table is the Extreme Rules match. You cannot even do it in a “No Holds Barred” match which isn’t logical but okay.

So firstly, you need to get a Table. How do you do that? Go outside the ring and to the side where there would be an Apron. Modern-day rings have digital boards on two end aprons on 2. The Raw 2005 Arena would have aprons on all sides. Press the “Pick Up Object” button on PC (Default U), L1 on PlayStation, and LB on Xbox.

Now choose the Table from the list and press “Heavy Attack” (Default K) on PC, X on PlayStation, and A on the Xbox to take it out.

Then you would have to set up the table. For that, you need to carry the table to the desired location and set it up by pressing “Heavy Attack” (Default K) on PC, X on PlayStation, and A on the Xbox.

Well, now if you hover around the table you would not get the option to Ignite. What do we do now?

We would have to beat up our opponent until we get a Finisher. Yes, we require a Finisher to set the table on fire. You would be losing that Finisher once you do.

When you get a Finisher go next to the table and you would get the option to Ignite. It will be the same input as that of a Finisher – Finisher/Signature Modifier + Heavy Attack.

Xbox users would press RT + A

PC users would have to press Space + K which is the default control.

You would see an animation where the superstar would light up a match stick on his boots and then throw it on the table to set it on fire. Not the most detailed and logical animation but we will take it.

How to Put Opponent through a Flaming / Burning Table :

Wondering how you would put an opponent through “Burning Table“. Well, to be realistic you cannot make someone lie down on a burning table. All you can do here is slam him through it. So you would have to use a grapple attack where the impact should be close enough to the table to break it. Or you could carry your opponent to the table and then slam him through it manually.

Here you can see me using the good old Powerbomb to put Ziggler (he deserved it) through the burning table. To learn how to carry your opponent just check out our detailed guide here

There you go, an easy tutorial on how you can ignite a table and then put an opponent through it. I hope the guide was helpful. Please let us know in the comments section down below. Also, keep an eye on FPS Index for more WWE 2K22 content and guides.