Are you searching for the best Class Setup for the Lachmann-762 Battle Rifle in Call of Duty Modern Warfare 2?

Well, this is just the right guide for you as I would be helping you build the best Lachmann 762 Loadout in COD MW 2.

It is the best time of the year for all the COD fans. Call of Duty Modern Warfare 2 is perhaps one of the best COD games I have ever played.

The game has got everything. Apart from the minor glitches here and there, the game offers you amazing visuals coupled with even better gunplay.

The Campaign mode was unlocked long back and I really enjoyed playing it. However, the best thing about COD is the multiplayer mode.  There is so much to do in multiplayer that even playing for 12 hours a day would not be enough.

There are a ton of weapons to unlock, and customizations to get, and with the new Gunsmith concept you need to literally play with different weapons to actually unlock attachments. Unlike in previous titles where you would just pick up a gun and keep grinding until you reached the last level.

The Best Lachmann-762 Loadout or Attachments in Call Of Duty Modern Warfare 2:

The Lachhmann-762 is the first rifle that you would have to use in the Lachmann class. I picked up this weapon to basically level it up in order to get my hands on the Lachmann Sub which is the MP5.

I know a lot of you would just use this weapon for the MP5. However, I will be really honest with you. The Lachmann-762 is perhaps the best rifle I have used in the game so far. It is a Battle Rifle that has two fire modes: Automatic and Semi-Automatic.

The rifle has a lot of recoil which is why you would hate it in the beginning. Once you start getting those attachments in, you would know how powerful the gun could be.  Here is what I feel is the best loadout for this gun. 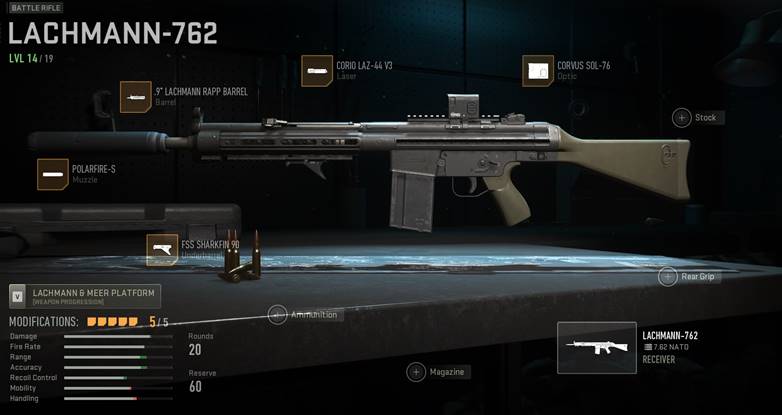 The Lachmann-762 has really high recoil. This is why we have used attachments that give us better recoil control. I feel that the Corvus Sol-76 optic works really well with the gun. However if you want to keep the default iron sight then exchange it with a Rear Grip or a Magazine.

Best Perks for the Lachmann-762:

That is all you need to know about the best loadout attachments Lachmann-762 in Call of Duty Modern Warfare 2 (2022).

I hope the guide was helpful. Please let us know in the comments section down below. Also, follow FPS Index for more guides and weapon loadouts for COD MW 2.