Gilgamesh’s abilities are such that people would want to use him in the solo lane. But there is a lot more to his abilities than you think. Let us find out the best build for Gilgamesh. 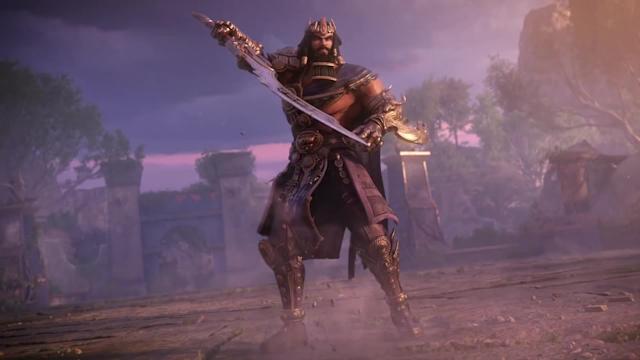 Lets check out what could possibly be the best overall build for this character. We would be focusing on playing this character in the solo lane and hence the build will be done accordingly :

What Starter Item would you use?

Let’s talk about Gilgamesh’s three abilities first. His 1st ability Sun-Forged Scimitar augments his own basic attacks. His 2nd ability would be a drop kick on enemies to clear out lanes. His 3rd ability would be augmenting his allies. Now since we are more focused on playing this character solo we would rather focus on his first ability. For that using Death’s Toll would be the best because we would have to depend on our basic attacks a lot more than the other ones.

However, if you wish to focus more on the second and third abilities the warriors’ axe or bluestone pendant could be used. They would help you push the enemies back.

Which relics should you use?

If you are focused on using Gilgamesh in the solo lane the first and the most important relic to use is the Teleport Glyph. This basically lets you teleport back and forth from the base to the tower. The second relic should always be what your team wants. For example, you can use the best of frenzy for getting a buff to yourself and your team during fights Warding sigil could also be used against enemies who depend a lot on their abilities. So it depends.

Which Boots should you use?

If you want to use Death’s Toll try out Ninja’s Tabi which boosts Gilgamesh’s attack speed. For ones who want to settle for a warrior’s axe or bluestone pendant, Warrior’s Tabi is absolutely fine since it boosts his physical power. You can try Reinforced Greaves along with Warding sigil too.

Which items to use?

Gilgamesh could be one be really offensive. He could easily take on enemies up close. The cons for this character would basically be his passive. It is just not reliable enough. On top of that, he could not heal himself as well. Therefore the best way to build this character would be to focus on his up close attacks making them stronger and faster and also to focus on ways for him to get his health back. More like a lifestyle would work well for him. This would replenish his health and would help him last longer in battles.

For boosting defenses try these :

For boosting attack speed even more try these :

I would not be surprised if I find most of the smite players trying to run with an attack speed build. He could be built into a very aggressive character. A character that when built with the correct defenses could work as a long-lasting tank as well. Hope this guide has been useful. Enjoy the game.