Fade Guide – This guide will help you understand and play the new agent Fade. 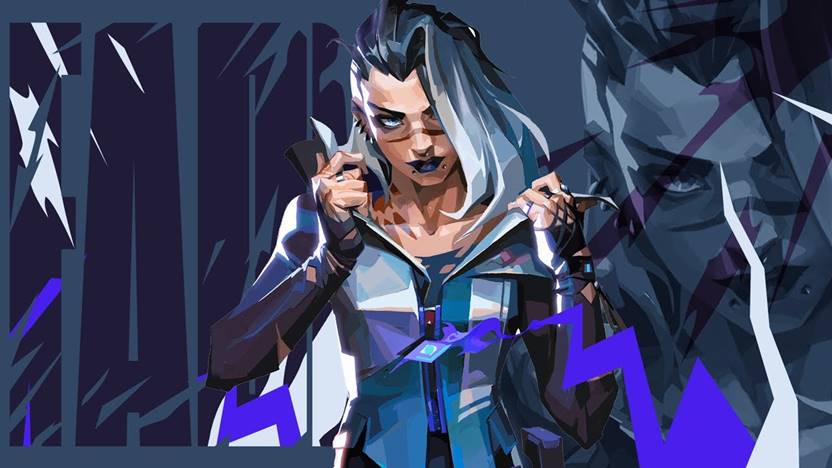 Fade is the new agent released with patch 4.08. Along with other changes that include Sova and Jett being nerfed I could probably see Fade overtaking them both at the pro scene and at the casual level as well.

Fade has the characteristics of becoming a great initiator like Sova and also could turn out to be a good duelist. In this guide, we would be talking about how you could play this agent and what are the best ways to make full use of her abilities.

Think about Breach’s AOE stuns along with Skye’s Seekers, Sova’s Recon Bolt, and Viper’s Decay. That is how overpowered this agent is. Let’s talk about her abilities now :

This is Fade’s Signature ability which has a cooldown. You equip an orb and then throw it over a location. Once it hits the ground it turns into a monster eye that finds enemies for you and reveals their location. Basically whoever looks at the monster will get revealed.

Not only that, the enemy will also leave a trail as they move. You could easily follow the trail to see where they are hiding after the reveal. However, the monster could be shot just like Sova’s Bolt.

Once you throw the orb in the air it will stay for 1.5 secs before it hits the ground. You can also force it to hit the ground by pressing Q again. Once it does, it creates an AOE Decay effect. It will also grab the enemies and not let them escape. You have only 1 charge for this ability.

This ability is like Skye’s Seekers. However, Fade sends out one creature which could be controlled by the mouse exactly like Skye’s flash, and the moment it comes close to an enemy it will near sight the enemy for 3 secs. Very similar to Skye’s Ultimate. It could be shot at but still is a very effective tool for catching an enemy off guard.

If you have revealed an enemy with Haunt, you would not have to control the creature with the mouse anymore. It will follow the trail and pounce on the enemy when it’s near.

Here is what I call a game-changer. We know how good Breach’s ultimate is as it stuns enemies over a huge area. Fade’s nightfall is only a better version of it. It decays all the enemies in range, also leaves a trail of their location, and at the same time deafens them, so they have no map for a period of time.

You get an instant 75 health decay when you get hit by the Fade’s Ultimate which recovers with time. However, you could finish off the enemies easily as they will literally have very low health.

How to play Fade correctly – Useful Tips and Tricks

Fade, to be honest, would actually be a very overpowered agent. I could easily see her making her way to the A tier or even S tier once players start using her more and understand her full potential. Firstly let’s talk about which agents could benefit from having Fade in the squad.

Brimstone, yes Brim would actually benefit from Fade being in the squad. Imagine a situation where you are trying to defend a site. The Attackers have entered and Brim has his Ultimate. Instead of randomly hitting the ultimate, think about how effective it would be if combined with Fade’s Seize ability.

So you would basically be trapping the players at a particular location with the Seize ability and then Brim could hit his ultimate on them giving him easy frags. You could literally take an entire squad out this way.

This same trick would work with Viper’s Ultimate too as you could easily keep the enemies inside the Viper’s Pit.

Also, you could use the Seize ability during attacking when you are trying to stop the diffuser by restricting his movements and also decaying his health.

Seize combined with Raze’s grenades would be so op. The enemies would not be able to run and would take all the AOE damage from the nade. Let’s talk about her Ultimate. It already has the best AOE damage in the game. Imagine trapping 3 enemies with the Seize and combining them with Raze’s Ult.

Fade’s Signature ability Haunt has a huge reveal radius. It will reveal the locations of any enemy that it sees. So imagine throwing the orb at the higher ground when it could see the entire site. Like on buildings or any higher ground.

In the case of Yoru, the Haunt ability would reveal him instead of his clone which is good. Her Prowler also attacks Yoru directly and not the clone.

Try to combine Prowler with Haunt. Whenever you reveal the enemy and if he is near to you use prowler to near-sight him, and you would not have to use the mouse to direct the creature. However, the downside to this ability is that it could be destroyed with physical attacks. It could break Sage’s Wall and go through Brim’s Molotov as well.

Her Ultimate is so good when you are trying to take over sites after a plant. Use the ultimate and you would know instantly when the attackers are hiding by looking at the trails. Also, they would be low, so you could even wall bang them if they are hiding behind a wall that lets bullets go through.

Overall the agent looks so overpowered that I may see nerfs incoming. I hope they keep her like this because I am having so much fun playing her.