Wondering why certain superstars are surprisingly left out of the game? Well, most of them would be added through DLC packs which would be released later on and throughout the year. In this article, we will tell you about all the DLC characters and when you can expect to get them. 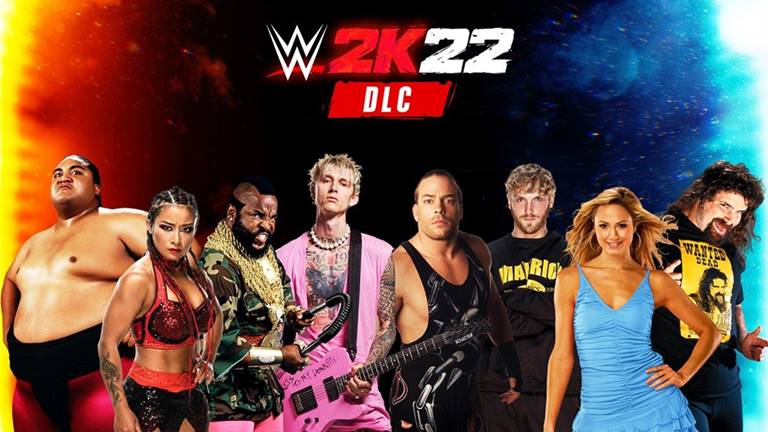 When I came to know about the 2K22 roster I was a bit shocked. There were so many superstars who were not there. The shocking fact was that these superstars are regulars on the show till now and yet we do not see them in the roster.

The first thing that hit my mind was that 2K might have just left them out due to certain issues which we do not exactly know of. Later on, I realized that 2K could actually take this opportunity and include these superstars within DLC packs which they had promised before release.

2K has recently confirmed all 28 DLC characters who are to be released through packs. Users who own the Standard Edition of the game would have to buy these DLC packs separately. However, users who already own the Deluxe or the NWO Editions will have access to all 5 DLC packs.

Let’s check out the DLC packs and which superstars will be a part of it :

The Whole Dam Pack would be the last of  DLC packs and would include celebrities like Machine Gun Kelly and Logan Paul ( who are supposed to wrestle in Wrestlemania 38 ). The packs look really good so far. These are the 5 DLC packs that are announced and confirmed so far.

However, I would not be surprised if 2K drops another additional pack after July. How many of you would actually want to have an Attitude Era pack? or a pack featuring superstars from the Ruthless Aggression era? I know I would want one. It is not like I do not like these packs, but being a 90s kid I would be thrilled to see more of my childhood WWE heroes in the game.

I am honestly pretty excited about the DLCs and I hope you are too. Let us know in the comments section how you feel about these DLC characters. Also, mention any certain character you would have loved to see in the game.